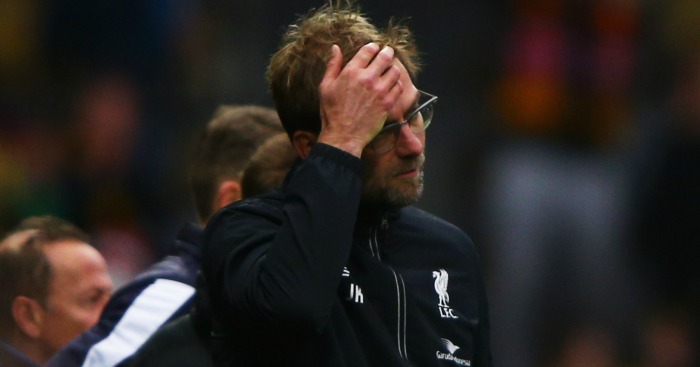 The Reds go into Tuesday’s clash at Anfield with a 1-0 lead courtesy of a Jordon Ibe goal in the first leg a fortnight ago, and will start the match as favourites to progress to Wembley despite their recent defensive struggles.

Liverpool were 5-4 winners in their Premier League clash against Norwich on Saturday, and while the match brought about a welcome five-goal haul, it also highlighted their ongoing defensive struggles.

Liverpool have the worst record at defending set-pieces in the Premier League this season and Klopp said: “First of all, we know about this problem. I’m sorry to say it’s not a problem we can ignore. It’s obvious we haven’t done too well.

“But we are always working on our weaknesses. We spoke about it intensively. We had a good talk together – not the first one.

“It’s not about the formation, not always about the quality. It’s often about ourselves. We defended the first ball well, then struggled with the second or third.

“It’s not too late to work, but we have to show that we’ve learned.”

Klopp was asked if he’d settle for a dour 1-0 win over Stoke and added: “Of course. Boring is not too cool. But 1-0 is a good result. We had it at Stoke in a good game for my side.

“It could have been a little bit more clear. But now we have maybe the best situation you can have in a semi-final.

“I’m really looking forward to the special atmosphere at Anfield. Let’s take the whole power of Liverpool and go to the final.”

Klopp was asked what reaching the League Cup final would mean to him and he added: “It wouldn’t mean much. A final is only…I never heard about second place in the Carling Cup. But winning is only a possibility if you make it. You’re remembered if you win it. But tomorrow is only one target: Go to the final.

“It’s football. You should not waste the opportunities of winning something. I know for the players it’s really important. They want to go to the final. That’s pretty cool. Hopefully I can come with them.”

On the potential signing of Shakhtar Donetsk forward Alex Teixeira, Klopp added: “I have absolutely nothing to say. Maybe it surprises you. I have nothing to say to things like this.”