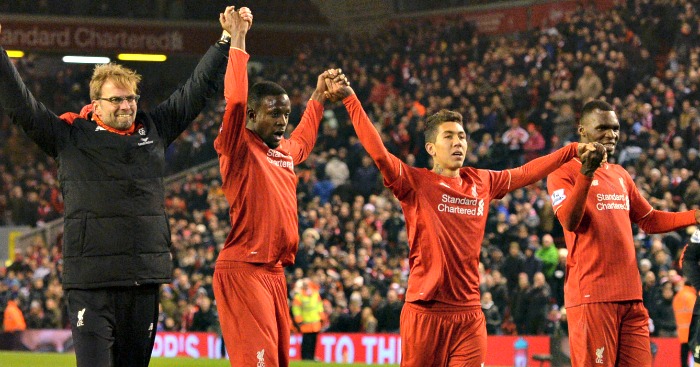 Jurgen Klopp has discussed the striking situation at Liverpool, with Daniel Sturridge and Divock Origi returning.

Sturridge and Origi returned from injuries for Liverpool against West Ham in the FA Cup fourth-round replay defeat on Tuesday.

Their returns mean Klopp now has four strikers at his disposal for Liverpool, who have struggled for goals so far this season.

Christian Benteke has struggled since joining from Aston Villa for £32.5million in the summer, but leads Liverpool’s goalscoring charts with seven in all competitions. Firmino, another summer purchase, is next with six, while Origi and Sturridge, who has only played seven games, are next with four.

Discussing his striker situation, Klopp said: “A few weeks ago we had no strikers and now we have four. We have really important games and it is not about satisfying a single player. We have to find a stable formation.

“We always create chances but maybe we don’t score often enough and concede a few goals. A lot of players are in good shape most of the time.

“It’s good that Roberto is much more stable and has a lot more consistency in his performances than when I first arrived.

“You cannot ignore the other team.

“When all the players stay fit we can train. Yesterday and the day before we had really good sessions. Now let’s go to Aston Villa.

“You can say Villa have nothing to lose anymore – they have to take risks. But it is no coincidence they are in this place (bottom of the Premier League).

“That’s how you prepare a game. Of course at the end it is not our thing to think about what Aston Villa’s target is. We have to do everything to reach our target.”