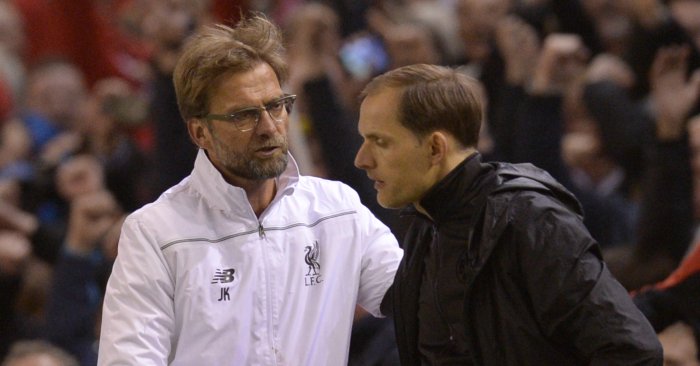 Jurgen Klopp has been asked about the “secret” to his positive record against both Pep Guardiola and Thomas Tuchel.

Klopp is one of few managers with a winning record against Guardiola, beating the Spaniard on eight of their 14 meetings.

The Liverpool boss also holds something of a spell over Paris Saint-Germain manager Tuchel, who he has beaten eight out 12 attempts.

The two will face off again on Tuesday when Liverpool host PSG in their Champions League opener, but Klopp expects another difficult match. He has had some good news about Roberto Firmino at least.

“If there’s a secret, let’s keep it a secret,” Klopp said.

“Always with records it’s quite difficult to explain. At Dortmund I had a strong side and he was at Mainz so it’s not really fair to bring that up.

“He’s an outstanding coach. I thought it’s a smart decision by PSG to sign Thomas Tuchel.

“With this type of team, with that individual quality, you need a coach to teach them how to play as a team.

“He’s one of the best I know. That makes them a big challenge for us.

“It’s football so there are always possibilities and opportunities to bring these fantastic footballers onto your level so you can beat them. That’s what we need to try and do.

“You cannot only defend or only attack. It’s all about the mix. I’ve been lucky down the years I had teams with a good mix of mentality and quality.

“When you see the games against Pep or Thomas there is an unbelievable amount of work to do. They are really smart with their positioning.

“We have to run, close the space and use the ball and stuff. I like this challenge but only because I have a really good football team.

“If I would not be the manager I would 100% watch this game so now I have the most average place in the stadium to watch it.”