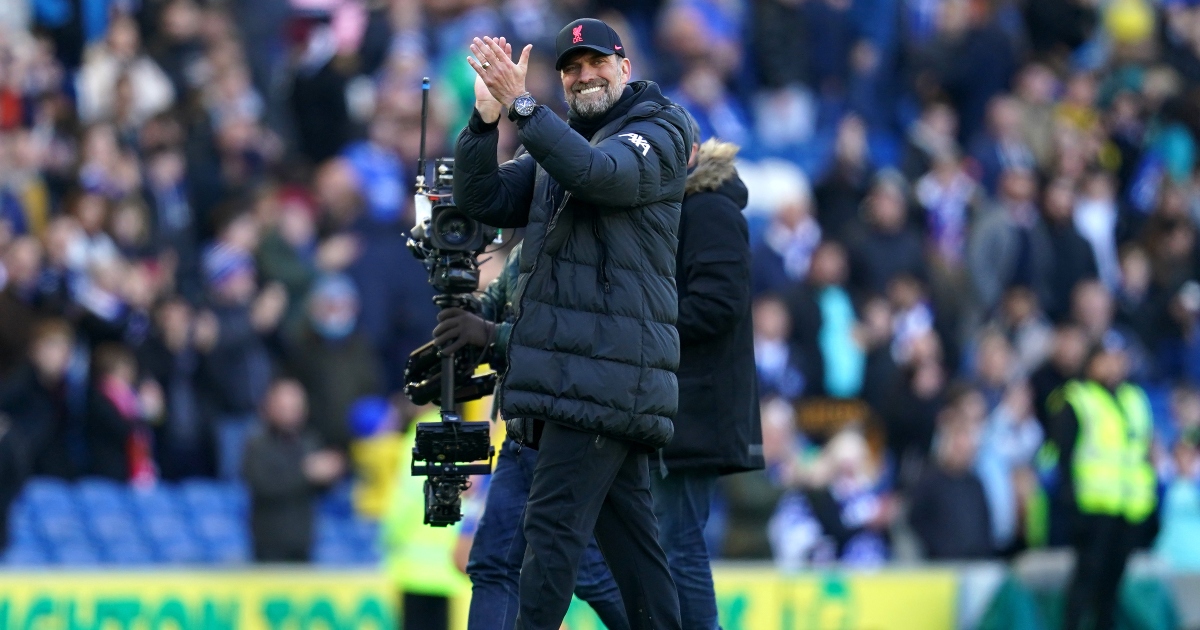 Liverpool manager Jurgen Klopp was happy with his side’s performance in the 2-0 win over Brighton as they closed the gap to Manchester City to just three points.

Klopp did, however, admit that he expect City to win every game they play. Pep Guardiola’s side are next in action on Monday night, at Crystal Palace.

Liverpool eased to victory at Brighton thanks to a brave header from Luis Diaz and a powerful penalty from Mohamed Salah.

Speaking to BT Sport after the game, Klopp said: “We were good, we knew Brighton are a really good team that can create problems, that’s what we saw from the beginning.

“Like the last game we need to get used to the opponents. They adapt to us a lot and play in areas to try and hurt us.

“We were really strong and scored a great goal. We had really good moments with massive chances where we missed the final pass. But I’m happy. There were moments at the the end where I’d like to control the ball more but it’s a difficult moment.

“It was expected to be a difficult game and I’m really happy with certain moments.”

Diaz’ header saw him wiped out by goalkeeper Robert Sanchez and Klopp praised the Colombian’s bravery in grabbing the opening goal.

“He did what a striker had to do. I didn’t see it back but it was spectacular enough in the first moment. To get in there with his head it was really brave. A great goal.”

VAR decided not to send off Sanchez, much to the surprise of many, and Klopp admitted he wasn’t sure if the decision was correct.

“We had our chances, we had massive counter-attacks that we didn’t use but it’s fine. I’m really not overly critical with the boys. Consistency is the most important thing in football, but it’s also the most difficult as well.

“I think we deserved it, to win the game and that’s all I ask for. I am happy.”

Liverpool’s second goal-scorer, Salah, left the field injured minutes after his goal and his manager revealed he was unsure on the severity on the issue.

“Something was not right. I think there was a situation where his foot got stretched. We’ll have to see.”

On the title race, the German added: “It’s always the same, you expect Manchester City to win every game when you watch them play.

“The only thing we can do is as win as many football games as possible. We’re ready, we don’t need to call it a title race, we just want to win games.”