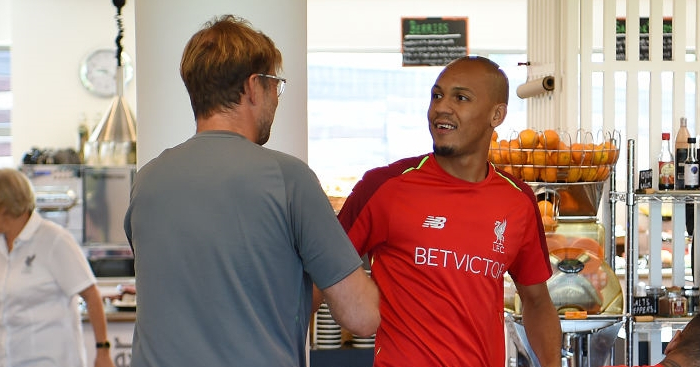 Liverpool bought Fabinho this summer for £43.7m from Monaco but he did not even make it as far as the bench against Crystal Palace and Brighton.

The Brazilian was left out Jurgen Klopp’s 18-man squad once again as the Reds struck a balance better than ever before against the Seagulls on Saturday.

Klopp chose Gigi Wijnaldum, Naby Keita and James Milner as his midfield trio, with Jordan Henderson coming off the bench and Adam Lallana remaining there.

Klopp was asked before the game why he was yet to give Fabinho his debut and he said: “It is about players understanding the position and who else is available as well.

“Otherwise Fabinho would have been involved in the squad, as he was in the first week.

“That is it. It is different football to what he is used to but he is improving already with big steps.

“I can see that in the sessions and that is cool.”

The Brazilian himself said: “I’m aware it’s a different playing style than Monaco.

“There were two in midfield there whereas here at Liverpool there’s usually three.

“My midfield partners have provided me with guidance and assistance. So have the defence.

“You seek guidance from the other players around you and that’s worked really well and I feel my performances in pre-season were good.

“Although the systems are slightly different, there are similarities too. Monaco had a transition similar to Liverpool’s.

“I think the two teams can be compared in this way; both them have very fast transition, with very fast players up front.”