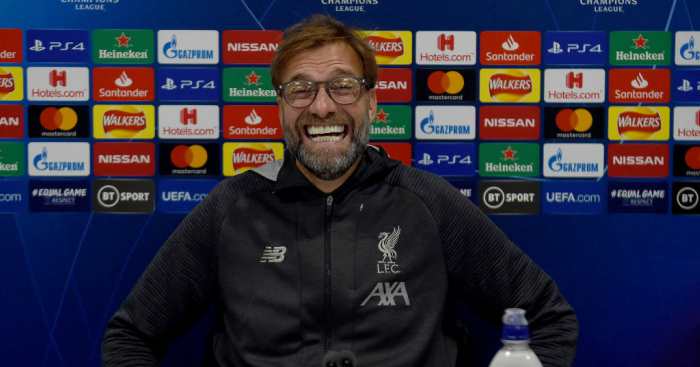 Liverpool manager Jurgen Klopp insists he has no concerns about Mohamed Salah’s fitness ahead of their Champions League clash with Napoli, while he has warned his side not to take beating the Serie A outfit as a given.

Salah was an unused substitute in the 2-1 win at Crystal Palace on Saturday after missing training with an ankle problem.

Klopp also provided an update on the fitness of defender Joel Matip, who has been sidelined with a knee injury, saying: “Joel is improving but is some time away. There will be a scan this week and then we will see how it is.”

Victory over Carlo Ancelotti’s side will ensure Liverpool finish top of Group E with a game to spare but Klopp insists his team cannot afford to look past this match.

“The biggest mistake we could make is that we have won it already and what would happen if we win it,” Klopp added.

“These things are not in our mind. Of course we try to win the game, it would be massive for us after the start we had. Napoli are a dangerous opponent.

Reds defender Andrew Robertson, meanwhile, has played down concerns over an ankle issue, insisting he can manage his fitness.

“It’s been better, just a bit stiff after matches and something I can manage with. I feel fresh and hopefully that continues,” Robertson said.

“I get paid to play games and train and we’re all the same, we don’t want to miss training sessions and games. It’s all about managing. We all want to play games but sometimes it’s not possible and someone has to step in and tell you otherwise.

“Sitting up in the stands is no good for me and my heart.”