Home All The News Klopp explains secret to Liverpool unity: It can’t be ‘you can all f*** off’ 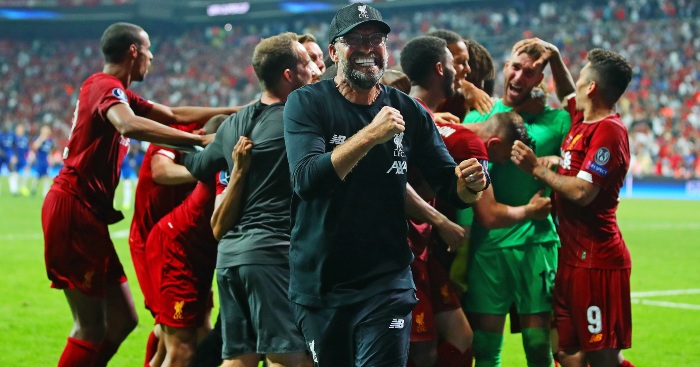 Jurgen Klopp has explained how his motivational techniques have created an environment in which his Liverpool players can thrive.

After missing out on the league title by a point last season and claiming the Champions League trophy, Liverpool are eight points clear in the Premier League this term.

In an interview with The Athletic, Klopp revealed the key to his success at Anfield has been making his players feel needed, and “treating them all the same”.

“There’s a lot of responsibility on the boys themselves. A person who doesn’t want to feel needed, I cannot help,” Klopp said.

“If you play in the first XI and it’s ‘yeah!’ or if you don’t play and it’s ‘oh, you can all fuck off’ then you cannot exist in this kind of environment, it’s not possible.

“Yes, I get that it feels different if you haven’t played but you must always be ready for the moment when you come on and stuff like this.

“How do I keep them motivated? I treat them all the same, 100 per cent. You score four goals or no goals, for me you are the same person. When we talk about football it’s easier for me to speak with the guy who scored four goals, but on a personal level they’re all the same for me.

“I like them all a lot — that’s why they are all here. It’s not that anyone has forced me to get around with these guys. They are all wonderful, different but wonderful. I like being around them. Hopefully, they know that and they feel that.

“They know that if you are at a club like Liverpool you want to play all the games until you are injured. Then that doesn’t work! We have to make sure we go through the season with as few injuries as possible.

“First and foremost, we have to win football games. At a club like Liverpool, you are expected to win pretty much every three days. For that we need more than 11 players so that makes it easier keeping 17 or 18 players happy with appearances. If we had 22 or 23 then it gets more complicated.”