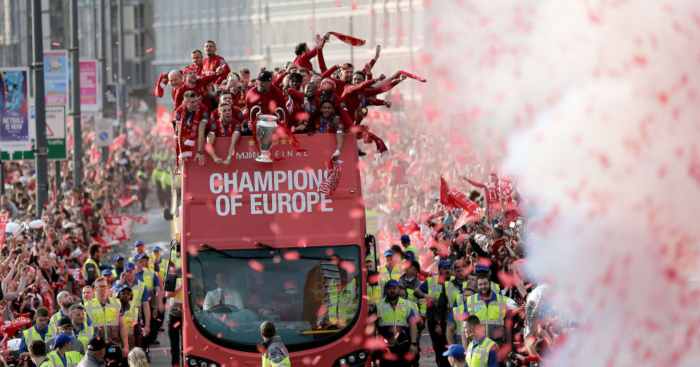 Jurgen Klopp has revealed what moved him to tears during Liverpool’s Champions League homecoming parade.

The Reds won the Champions League on Saturday when they beat Tottenham 2-0 in Madrid thanks to a first-half penalty from Mohamed Salah – who loves to troll – before Divock Origi wrapped it up near the end.

The six time champions returned home on Sunday to a rapturous celebration on the streets of Liverpool as a reported estimatation of 750,000 fans came out to welcome the club home.

The team paraded the trophy from an open top bus whilst enjoying a few beers as they secured the trophy after Premier League heartbreak just a three weeks earlier.

Now, Klopp has admitted how it all got a little bit too much for him.

The German coach, who won the Champions League for the first time in what was his third final, said: “I cannot really describe it because I cried a little bit as well because it’s so overwhelming what the people are doing.

“When you have a direct eye contact and you see how much it means to them that’s touching to be honest. It’s brilliant.

“Thank God the weather changed in a positive direction so we are having a wonderful time here. It’s really special.

“I don’t know exactly how many people live in Liverpool but there’s not a lot of space for fans and supporters of other clubs, so it’s incredible!

“This team is really doing so well and if you are a young kid which team would you support?

“There are not a lot of other options and opportunities apart from Liverpool so it’s really nice to see.

“You see in their eyes how much it means. It’s unbelievable and it’s so intense. Today, wow! It’s crazy.”