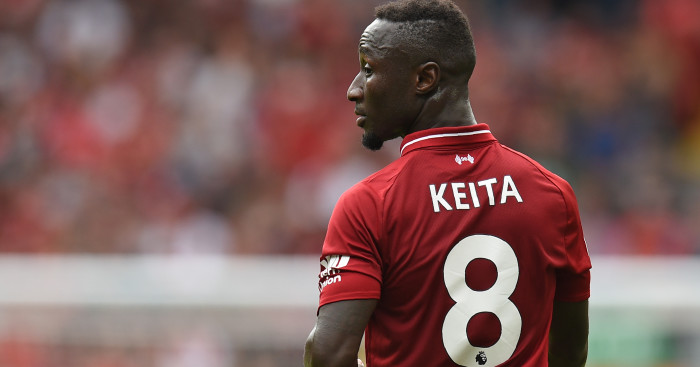 Liverpool manager Jurgen Klopp admits Naby Keita has yet to reproduce the form which persuaded him to spend £52million on the midfielder – but it is not a concern.

The 23-year-old has made 18 appearances since arriving in the summer – 12 months after the Reds agreed a deal to sign him from RB Leipzig – but has failed to feature in the last three matches.

Keita started the season promisingly but a couple of niggling injuries set him back, however, Klopp is prepared to give him time to adapt.

“I spoke to Naby. Everything is fine. I am completely happy with Naby,” said the Reds boss.

“Could he be a bit more confident in the games? Yes. Is he exactly the player in his best time at Leipzig? No. He is still adapting, that’s how it is.

“Everyone saw at the beginning of the season how brilliant he played. Tottenham was a fantastic game from him, without thinking too much.

“A little injury here, a little injury there, and it was kind of a little setback but he is a fantastic player and I am really happy to have him here.

“There was no reason (for leaving him out), just other boys were in a good shape as well, a bit was positioning, the system, all that stuff, and that’s how football decisions are.

“There is really no doubt about the boy, he is an outstanding player.”

Keita is likely to get a start in the FA Cup tie at Wolves as one of a number of players in need of pitch time.

Another of those is Adam Lallana, who has had his struggles with injuries also.

“I can tell you it is a good opportunity for all the players,” added Klopp.

“Adam is actually in outstanding shape. It’s unbelievable. It was close in the last game whether we started him or not. He is really, really good.

“Always in life if you learn from your experiences – you cannot learn too much from being injured – but when you come back what is your mood?

“Adam is a player who would play four games in a day if he could because of his desire to play football.

“He is in the best moment since I’ve known him as a person and he will have a big part of our season. That’s cool.

“He always accepts my decisions but then it is about what you make of them, if you are in or out.

“If I’m in doubt about somebody or something is wrong then I will speak to them immediately. But everything is fine. He is an important part of the squad.”