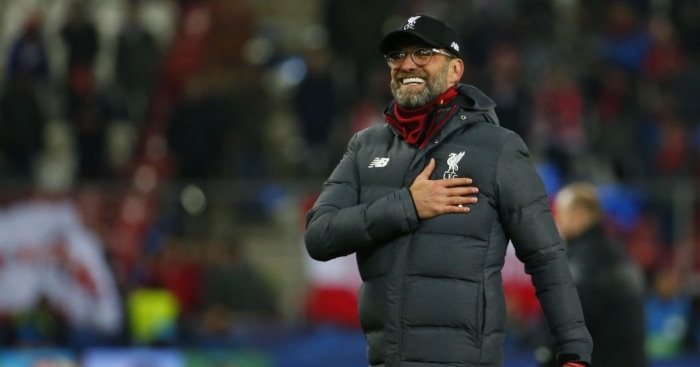 Liverpool boss Jurgen Klopp admitted he had “no idea how” Mo Salah scored his goal after missing earlier “sitters” in their 2-0 win over RB Salzburg.

The Egyptian scored from what seemed an impossibly tight angle having missed a number of much simpler chances.

Salzburg were a match for the Reds in a very even first half, but the Champions League holders showed their class in the second period as Naby Keita’s header put them in the lead before Salah sealed the victory.

Klopp admitted to a tense first half, but was happy with how his side played, particularly in the second half.

He told BT Sport: “What a team. What an effort. It was a tough game.

“They started so direct. They did so many smart things. We were ready to defend it. It was a very tense game.

“In the second half they couldn’t cope with the intensity. We scored two wonderful goals. We could have scored six or seven which is crazy. We won the group, we won the game, all good.”

“First half, we had to put a proper shift in. When we had the ball we had sitters and didn’t score. Then Mo [Salah] scored the most difficult situation of the whole night – he scored that goal.

“I have no idea [how]. With his quality, how he didn’t score one or two of the others I have no clue.

“So many sensational performances. This kind of attitude, it’s great. A tricky one but we did it.”