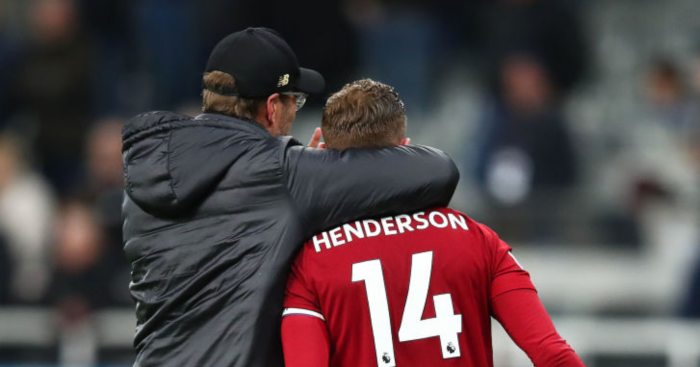 Jurgen Klopp has revealed that Jordan Henderson will be out for three weeks with the hamstring injury he suffered in Liverpool’s 1-0 loss to Atletico Madrid in the Champions League.

The Reds captain will likely miss four games, starting with Monday night’s clash against West Ham but will hope to be fit for the return leg against Atletico at Anfield on March 11.

Klopp said: “Hendo it could have been worse. It was a hamstring. You have different hamstring injuries now in PL, Kane, he will be out for three weeks or so which isn’t cool. But we were still lucky.”

As for how he expects his side to react to a react to a rare loss this season, the Reds chief added: “It’s still putting things right, just not in the competition. We lost the game, that’s not positive. But it felt like a defeat.

“If you really want to be successful, then it has to feel really bad.”

Klopp has also indicated that he will select a strong side against the Hammers, with the second leg against Atletico almost three weeks away.

He added: “Apart from Hendo, all the other boys are fine. But Tuesday-Monday there’s absolutely no need to make changes. We will see.”

Xherdan Shaqiri will also be missing against West Ham, and Klopp added that the Swiss playmaker is still a little way off a return.

“Not close to team training yet. We cannot put any time pressure on it. It’s not a big one but big enough. We have to wait.”