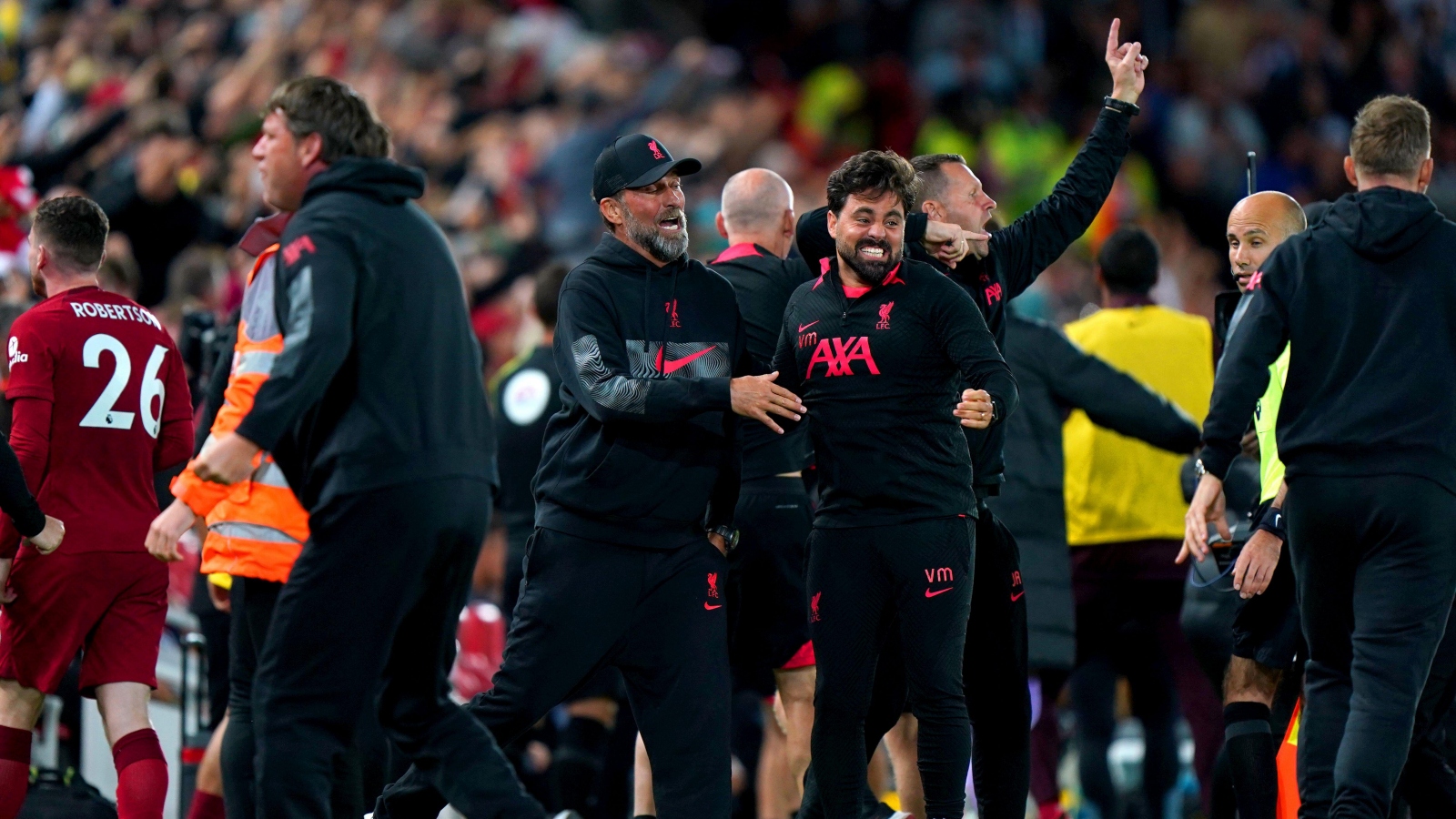 Jurgen Klopp believes Liverpool’s dramatic win 2-1 against Newcastle United will be remembered “for years and years”.

20-year-old Fabio Carvalho slammed home a 98th-minute winner for the Reds against Eddie Howe’s side on Wednesday evening.

Liverpool started the season slowly but demolished Bournemouth 9-0 on Saturday before hosting the Magpies.

Klopp says it was a “difficult game” but insists the win was “massive” for momentum as his side look to get their title charge up and running.

He told BT Sport: “The perfect moment to win this game because it was a difficult game, very passionate, aggressive defending.

“It’s difficult to pick up the rhythm from a game where everything clicked immediately and you find yourself in situations where it isn’t clicking immediately.

“Even before we were 1-0 down we looked in situations a little bit desperate. We had to force ourselves to keep calm a little more and keep going. In the end we forced it and what a wonderful goal from the birthday kid.

“This is the best way to win a football game. I think that we scored after 90+8 is the perfect response. I’m really happy about that.

“It’s massive (for momentum), massive we will remember it for years and years. We had once a 3-2 at Newcastle where Divock Origi scored late. I’m not 100% sure they all believed until the end but from now on we have to as we showed again it is possible.”

On the match-winner Carvalho: “For him it’s his second goal. Fantastic boy, we changed pretty much everything, very offensive orientated but he can also play there. If a boy is as good as he is then he needs the moment.”

Klopp also told BBC Sport: “Football can go in both directions but tonight it went in the right one, a perfect end of the game.”

“I am really happy that everyone saw it tonight. It was hard to take. It was a difficult game anyway, Newcastle invested a lot to close us down. They were close to getting pretty much everything for it. Of course everyone wants to see a football game and when it is interrupted that often it is not nice for anybody.

“The only chance we have, not just for this game but in general, the referee has to pick earlier yellow cards. I don’t know when the kicking the ball away stopped being a yellow card. When did this rule die?

“I had no idea if that tonight it was on purpose or if they players really had to go down because slightly injured. I don’t know.”

The German manager continued: “I am not sure everyone in the stadium kept believing but from now on we have to. What a wonderful goal from the little one. He is in a great moment.

“Harvey Elliott was the best player on the pitch, without a shadow of a doubt. It was nice to see he picks up from where he was before the bad injury. Fabio, what a boy. What a player. I am pretty sure he will want to have that feeling more often and I am pretty sure if he keeps working he will have it more.”

“When you are in the lead here naturally it becomes a different game. You have to defend very well, I don’t think they had many clear cut chances but that last minute goal was a heartbreaker.

“He looked really good. We didn’t anticipate him playing the whole game. He picked up a knock, a dead leg, so we wanted to protect him but he looks a special player.

“Everybody did well. I can’t fault anybody. We have given everything to every game so far, there was no gamesmanship from our side there were just tired bodies.”