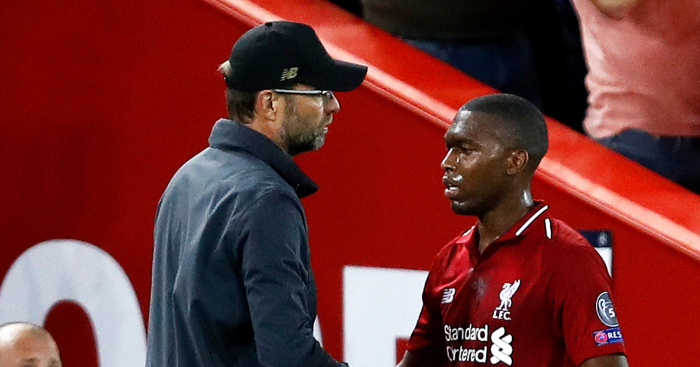 It’s always struck me that surely absence only makes the heart grow fonder for someone who is a bit of a jerk to you, but just little enough that you kind of forget about it after a bit of time apart. In which case, perhaps it is the perfect phrase to describe Daniel Sturridge and Jurgen Klopp.

Klopp, all full of hugs and love and affection, never seemed to warm to Sturridge. The striker enjoyed a much happier time under previous manager Brendan Rodgers, who never questioned Sturridge’s pain threshold like Klopp did just a month into his reign at Liverpool. Alongside Luis Suarez, Sturridge was the man at Anfield, scoring 21 goals in 29 league games to help take them so close to the Premier League title.

So instantly did Klopp make his antipathy public that the idea the striker would still be at Liverpool with the manager’s third anniversary approaching would have seemed mildly preposterous; a sure indicator that things had not been going exactly to plan at Anfield. Sturridge has scored fewer league goals for Klopp than he did in that one golden season for Rodgers.

Having reportedly had only West Brom and Newcastle to choose between in January, Sturridge must surely have hoped that his spell in the Midlands would help enhance his profile sufficiently to draw in other, more palatable suitors: one who would shower him with a hollow façade of love and tell him he’s their favourite.

Sturridge seemed like a perfect signing for a certain type of misguidedly aspirational mid-table club with deep pockets and a preference for name value over raw talent – the kind of club that loves to hoover up big-club nearly-men, and Sturridge is that twice over. Surely it was only a matter of time before he rocked up at West Ham.

With Liverpool set for another top-four finish and romping to a Champions League final, Klopp won’t have had a moment spare to feel pangs of longing for Sturridge. Klopp had moved on; his front three looked unstoppable. But then they met Sergio Ramos, who threw Mo Salah to the ground in Kiev, leaving Klopp, looking to the bench to replace his best player after just 31 minutes.

There were just two possible changes: throw on Dominic Solanke, whose appearances had made Liverpool fans pine for the days when they had David N’Gog as a back-up option; or Adam Lallana, who had played just 16 minutes in the previous seven weeks.

If reality were more perfect, and by that I mean ‘if actual football were more like a Mighty Ducks film’, Sturridge would have appeared from the back of the lower tier, shouting “I’m coming, boss!” as he made his way down the steps, stripping off his civvies to reveal a pristine Liverpool kit, and sharing an affectionate smirk and a nod with his manager as the fourth official resignedly hoisted the electronic board bearing the number 15 in bright green. Perhaps things would have been different.

But there was no Sturridge, no special moment of redemption followed by a warm embrace. It’s probably just as well. Uefa’s strict administrative rules on player registration and teamsheet submission would have surely seen the result expunged and the trophy awarded to Real Madrid in any case. The whole thing would have been tremendously embarrassing once the sentimentality had worn off. It’s harsh, but those rules are in place for a reason, and we would all be well advised to remember that Gordon Bombay was a drink-driving, pro-cheating piece of trash, and nothing for anybody to aspire to.

That left Klopp to plump for Lallana – whatever ‘plumping’ means, hopefully nothing to do with boners? – and to wonder if there might not be a place for a more humble Sturridge in his side after all.

Happily, Sturridge feels the same way, telling ESPN in July: “It’s the same as, I don’t know, if you’ve been with a woman for a long time, and then you’re like, ‘Man, I don’t feel like it’s working out anymore.’ But then you go away, like, ‘Me and my girl’s relationship was kind of sweet still. I might have to go back there.’ It’s kind of like that.” Five months at West Brom will do that to you, I suppose.

The basic tenets of good story structure dictate that the main players must end up back where they started, but having gone through an experience that has changed them as people. That is where Klopp and Sturridge find themselves now. Klopp may not give Sturridge many more minutes, but he no longer seems like an unfit striker getting minutes out of pity and desperation: instead, he is a much-needed and devastating plan B, as Paris Saint-Germain found to their cost. Even if he does an ‘annoying worm’.

If the pair can maintain their new mutual understanding, Sturridge could become a small yet vital and beloved part of Klopp’s Liverpool side. Sometimes, the person you needed to complete you was right under your nose the whole time.