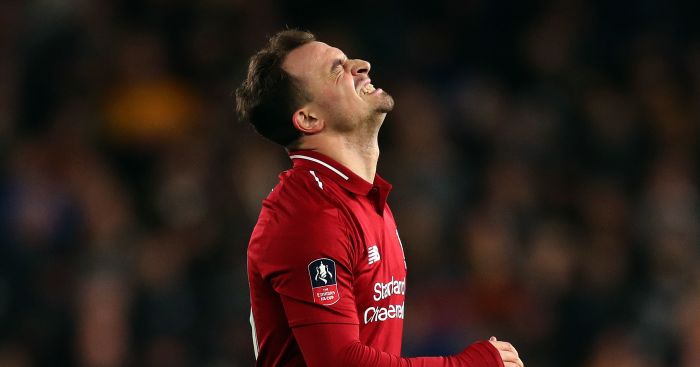 Jurgen Klopp has given an update on Xherdan Shaqiri’s embarrassing injury ahead of their Premier League clash with Tottenham on Sunday.

Shaqiri became Liverpool’s latest brilliant buy from a relegated club when he joined from Stoke last summer for £12million.

The Swiss international has been a wise purchase, starting just 11 Premier League games but scoring six goals and assisting two for his team-mates.

But since the turn of the year, Shaqiri has found himself playing an increasingly-limited role under Klopp, with his poor run of seeing him pretty much drop out of the German’s thinking.

The Switzerland national squad provided the first clue about the playmaker’s absence in recent weeks by tweeting he had been suffering with an uncomfortable injury.

“The player suffers from inflammation in the pubic area,” was their brief explanation at the time.

However, Klopp has now revealed Shaqiri has been struggling with the problem for some time, but told the club’s official website that he expects the star to be fit again for Sunday’s huge clash with Tottenham at Anfield.

“Shaq, since a couple of weeks [ago], has had some problems with the groin.

“He trained, not how he could train, but was still in the squad and all that stuff because we didn’t have a lot of options. Now he feels better day by day and should be fine for the weekend.”