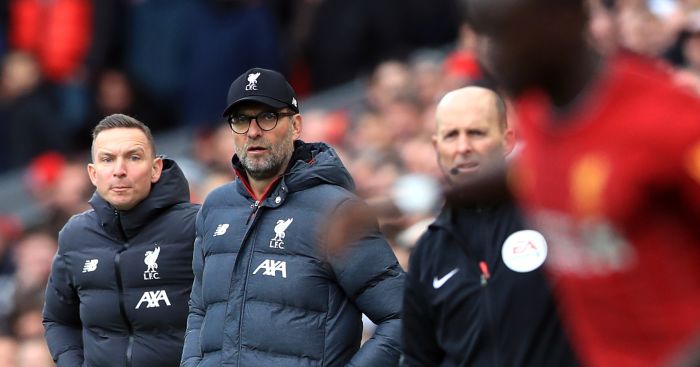 Jurgen Klopp wasn’t happy with Bournemouth’s opening goal at Anfield but was delighted with the way his Liverpool team hit back from that setback at the end of a difficult week to complete a record-breaking 22nd home Premier League win in a row and another step towards the inevitable.

Victory was a relief for the Reds who, while they have the league firmly sewn up, had lost three of their previous four games in all competitions, including a Champions League last-16 first-leg defeat to Atletico Madrid and Tuesday’s FA Cup exit to Chelsea.

So going behind early to Bournemouth certainly wasn’t in the plan for Liverpool, but Klopp felt the goal shouldn’t have stood.

He told BT Sport: “The first goal was, from my point of view, 100 per cent a foul, nothing else. The ref doesn’t see it.

“We wanted to fight back before the game so then we had to fight, really back and put them under pressure. We did a lot of good stuff, had really good situations, scored wonderful goals and played really good football.

“We did better in the second half but the set-pieces were still there – and that’s always a big strength of Bournemouth – so we had to be 100 per cent concentrated, we were and we deserved the three points.”

On the new top-flight record off 22 successive home wins at Anfield – which stood since Bill Shankly was in charge in 1972 – Klopp said: “We will never compare with that fella, so it’s great.

“We didn’t think about the number before the game, but after the game, when you win the game you can think for a couple of minutes about it. It’s nice, it’s special. We have to fight hard. We are not geniuses but we have to fight until the end of the season.”