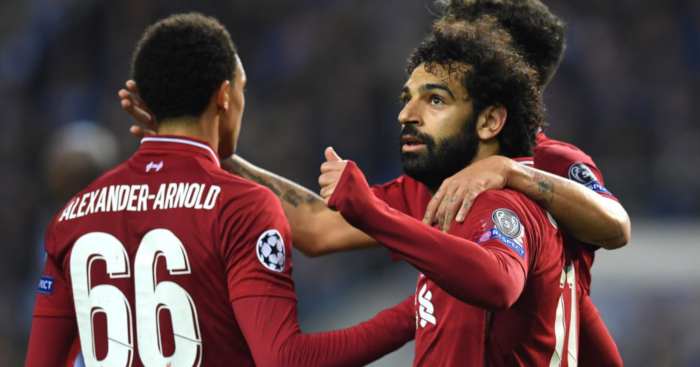 Jurgen Klopp has heaped praise on Mohamed Salah after the Liverpool forward was listed as one of the ‘most influential people in the world’.

Salah once again played a starring role in Wednesday’s 4-1 win over Porto that put Liverpool through to the Champions League semi-finals against Barcelona, teeing up Sadio Mane for the opener and then scoring the second.

It came on the day that Time magazine listed the Egyptian in their top 100 most influential people in the world, and Klopp said Liverpool were lucky to have him.

“He is a role model in so many different ways,” Klopp said. “It’s really, really nice to have him, not only him but Sadio as well.

“They are both Muslims and they live that in a world where these things are so often discussed in a dangerous manner, where we think they are all like this or all like that.

“We know it’s not true but it’s nice to have someone around who is full of joy, full of love doing what he’s doing.

While Liverpool were cruising to victory in Porto, title rivals Manchester City suffered a dramatic exit from the Champions League when a stoppage-time goal in a remarkable 4-3 epic against Tottenham was ruled out by VAR.

Klopp said he could not know if the game would affect City either positively or negatively for the rest of the season, but said he could only feel sympathy for Pep Guardiola’s side.

“It was unbelievable, eh? Seeing that I just really felt for them,” he said. “That’s how it is. Everybody thought the ball was in and the whole stadium is celebrating.

“I know some people say without VAR it’s a clear goal but it was offside in that moment, nobody really doubts that, but that’s tough to take I’m 100 per cent sure.”