Home All The News Klopp hails Reds coaches: ‘I’m not a one-man show’ 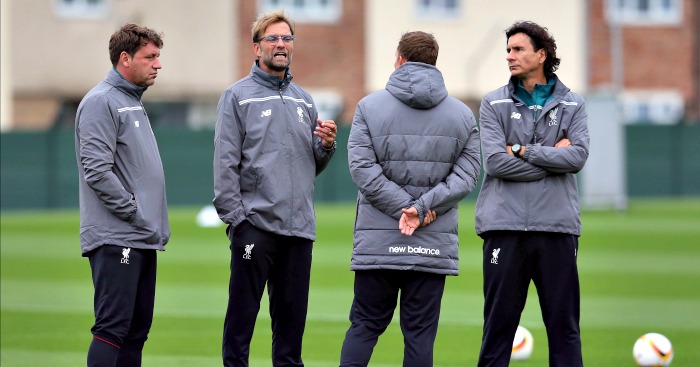 Jurgen Klopp has praised Liverpool’s coaches after saying that he is “not a one-man show” at Anfield.

The German has been in charge of the Reds for ten months, in which time the club have reached competition finals – the Europa League and Capital One Cup.

Speaking to Goal.com, the former Borussia Dortmund manager admitted that he resents the limelight, and was quick to praise his Anfield coaching team.

“I am lucky because I’ve had the possibility to bring the best people together,” said Klopp.

“I’m not a one-man show. I was never that in my life, and I never want to be that. I know I’m more on television and I’m more recognisable than maybe even the players because they run and train, but I just stand there and my face does all these funny things that everyone can see all the time.

“I don’t want this attention and I don’t like it, but I accept it’s part of the deal.

“My job, first of all, is to watch everything because I need to know all the things that go on. You don’t see everything clearly when you are in the middle of the chaos, so I often stand a little bit on the side, because we’ve prepared the training together and everyone knows what they need to do.

“Zeljko is the best coach I’ve ever met, he is unbelievable, like a football book! Pep is in a very good way, heading in the right direction. He is young, with wonderful skill which will see him become a great coach in future, I’m sure. I was happy to bring in Andreas [from Bayern]. He has top experience, is really educated in his job and is a good guy as well.

“John Achterberg – more passion for goalkeeping is not possible! Pete – he’s watched I don’t know how many games in the last 20 years, he can tell you everything. He’s another who has to see everything, and so in total we have 10 plus eyes on things and then after training, it’s not over. We sit together and discuss what we’ve seen.

“When I started as a manager, I did everything – all the jobs alone – and it was the best school you could have. I learnt everything from point zero and that’s good. But today we don’t need that, we work together as a group who are very experienced, but are still very hungry to learn.

“We talk a lot, and that for me is the best lesson you can get in a day – to speak to smart people about things they know about much more about than you do.”