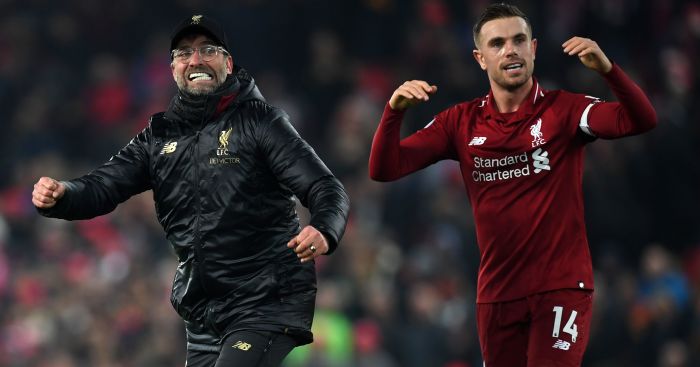 Jurgen Klopp has hailed Jordan Henderson for carrying out “the most difficult job in the last 500 years of football”.

Henderson helped turn the game as Liverpool kept their Premier League title hopes alive with a 3-1 victory at Southampton on Friday.

The captain scored the final goal and assisted the second after being introduced with little over half an hour remaining.

It was a sublime performance from an oft-criticised player who has been key for Liverpool in recent weeks.

And Klopp has echoed the thoughts of Henderson’s international manager.

“That goal meant so much to him and to us,” Klopp told Liverpool’s official website.

“He’s just a fantastic boy. He deserves all the praise but he doesn’t get too much of it.

“Hendo, from my point of view, is a brilliant player. He’s our skipper, he’s a fantastic character. If I had to write a book about Hendo, it would be 500 pages.

“So I’m very positive. The most difficult job in the last 500 years of football was to replace Steven Gerrard. In the mind of the people it was like if it’s not Stevie, then it’s not good enough.

“And he has dealt with that outstandingly well so he can be really proud. Now we have to think of the future and he is a very important part of our team.”