Home All The News Klopp hits back at Dyche: ‘Sturridge is not a cheat’ 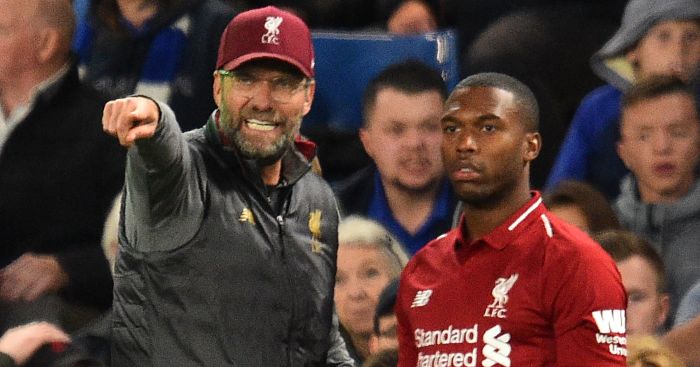 Jurgen Klopp has stood by Daniel Sturridge after Sean Dyche labelled the Liverpool striker a “cheat” after their 3-1 victory over Burnley.

A war words (we just love them) seems to be developing between Klopp and Dyche after the Clarets boss already responded to claims from the German that his side were overly “aggressive.”

That was after Joe Gomez suffered an injury during the match that has ruled him out for up to six weeks.

In his press conference on Thursday, Dyche had this to say about Sturridge: “He never even got touched, nothing near him and he went down and actually got a free-kick for it.

“I watched Liverpool as a kid, I was a Liverpool fan growing up, and they had a fantastic side of skill, will, demand and a physical edge.

“Now if that’s gone or you’re saying our lads are not allowed to make those tackles that they did last night and it’s been replaced by cheating then I am absolutely happy to be old fashioned.

“There is no way I would not want to see good, proper professionals, challenging in that manner like ours did last night. No way.”

And Klopp issued a stern response on Friday ahead of Liverpool’s trip to Bournemouth on Saturday.

“Daniel Sturridge is not a cheat,” Klopp told reporters. “I’m not sure whether he (Dyche) spoke about the challenge of Bardsley on Moreno.

“What can I say? Sometimes a striker expects a tackle and tries to avoid it by jumping.”

On Alisson’s role in the win over Burnley, Klopp added: “Alisson played a big, big part in the game. Burnley’s goal should have been disallowed. It was offside and both hands on the ball. At 2-1 up he made a brilliant save.”