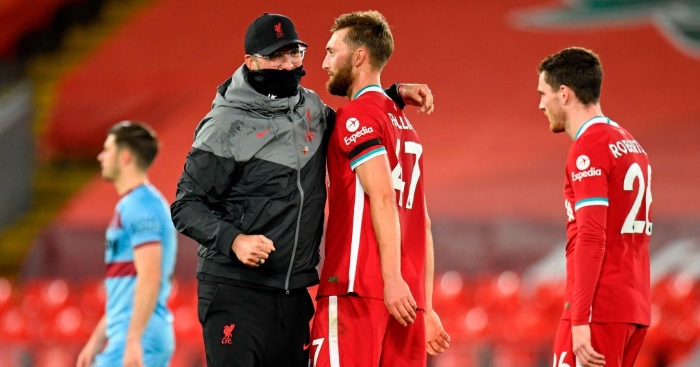 Liverpool went behind in the tenth-minute as Pablo Fornals put the away side ahead.

Mohamed Salah equalised in the 42nd-minute from the spot. The referee ruled that he had been brought down unfairly in the box.

Diogo Jota scored the winner for the Reds in the 85th-minute. He was brilliantly found by Xherdan Shaqiri and calmly slotted the ball home.

Speaking about Phillips, Klopp said: “He’s a brilliant guy, smart, intelligent, everything. He’s not easy on the eye, he’s not Lionel Messi, but who cares? In the air, he’s a monster! He was incredible.

“For the first game, I think everyone can imagine how nervy that must be after a long wait. It’s a crazy story, three years ago he was on his way to America.

“Twelve Championship teams wanted him and to me it was clear he was going, and I was fine with that. It didn’t work out for whatever reason, and it’s great! Tonight he was spot on, he helped the team incredibly.”

Speaking about Jota, the German boss said: “We fought really hard to sign him. We didn’t need to convince him too much, but we had to fight for it. He’s an exceptional talent.

“He has the speed, physicality, technique, he’s both-footed. He’s much better than I thought he would be and that’s really impressive.”

When asked about the overall performance, Klopp stated: “The world is in a difficult place and we are happy to be allowed to play football. So we have to try everything to win football games. It’s not about shining, or whatever, it’s about hard work. That was absolutely necessary against this opponent.

“It’s not about the simple stuff because they are too good for that – you need to be cheeky, tricky as well, and we were.”