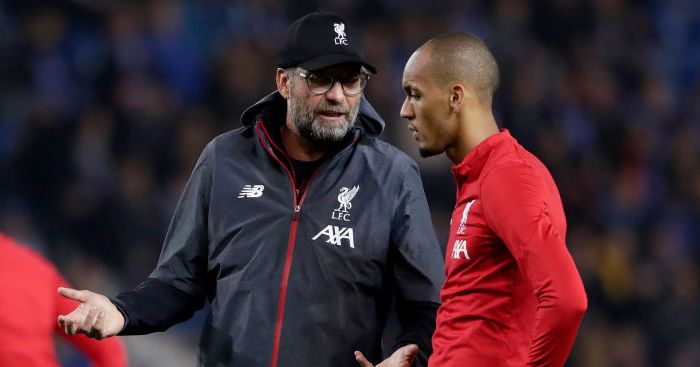 We need to talk about Kevin
Many things came to mind watching Liverpool come from behind to secure a deserved victory against Tottenham on Sunday. Their imperious home record, and the Anfield crowd that so often facilitates it. The brilliance of Trent Alexander-Arnold and Fabinho. The helplessness of Tottenham. The fact that these two teams competed in a Champions League final a few months ago.

For Neil Ashton, he was reminded of one thing and one thing only.

‘Jurgen Klopp went all Kevin Keegan by claiming he is “loving it”.’

‘The Liverpool boss was thrilled as his side came from behind to beat Tottenham.

‘Klopp sounded like Kop legend Keegan, who made similar claims when his Newcastle side were trying to win the Premier League in 1996.’

Mediawatch must have missed the post-match interview where Klopp pointed out that Manchester City have got to go to Middlesbrough and get something, and that he will love it if Liverpool beat them, love it. Silly Mediawatch.

‘Victory restored their six-point lead at the top.

‘And Klopp said: “I loved it. That was us at our best. The best thing was that I could not see their goal influence my team. We were not nervous, we just followed the plan and filled that plan with passion, emotion and direction.”‘

Yep, sounds exactly like Kevin Keegan. Because Kevin Keegan has a trademark on every phrase that includes references to loving something. And you couldn’t move for him talking about passion, emotion and direction.

If this isn’t the greatest example of The Sun being able to write anything about Liverpool because they know no f**ker on Merseyside will read it, then what is?

C-c-call it a U-turn
‘AND relax. Tottenham, once the darlings of English football, are back. All is well and good in their complex world again’ – Neil Ashton, The Sun, October 23.

‘Tottenham, languishing in mid-table, 16 points behind the Premier League leaders, are already out of the conversation’ – Neil Ashton, The Sun, October 28.

Fab folly
Player ratings are silly. Everyone knows this. Asking one person to watch at least 22 others play football for 90 minutes and offer fair and reasoned analysis while not missing anything is thankless.

Still, it is a cornerstone of football journalism that continues to throw up moments of hilarity. Such as the Daily Mirror‘s John Cross giving Fabinho a 6/10 for his performance against Tottenham.

He did have ‘little to do defensively’, to be fair. Although that does make it all the more impressive that he made four tackles and three interceptions – both more than any other player.

The Brazilian was definitely out-performed by six Liverpool teammates and six Tottenham players – yes, Liverpool got a combined 71/110 and Tottenham got 72 – and equal to Danny Rose and Dejan Lovren. Only Serge Aurier (5/10) was worse.

He was sh*te, basically.

Xhaklash
But the talking point from the weekend is Granit Xhaka. And Jamie Redknapp has some words of advice in the Daily Mail:

‘There were times when I got stick off my own fans and, like Granit Xhaka, I responded by telling them to ‘f*** off’. That was out of frustration. When I look back, I realise I should have been looking more at myself than anyone else. Their criticism was nothing personal. I was not playing as well as I should have and Xhaka needs to accept that, too.’

You know what, Jamie? Fair play. You might be the only person in the media on Monday morning not pretending that Xhaka is the first player to have ever swore at his own fans in the heat of the moment. Good on you.

‘His performances at Arsenal have been below par. He is supposed to be the club’s captain and I’d never dream of cupping my ear like he did yesterday.’

NOT: Cupping your ears.

Glad that one’s cleared up. Now ban him for life.

‘Typical United. They became the first club to register 2,000 Premier League goals and delivered a first top-flight away win since February – and still the strikers managed to turn a major positive into a bit of a negative.

‘Marcus Rashford and Anthony Martial both had spot-kicks saved by Tim Krul at Carrow Road, meaning boss Ole Gunnar Solskjaer has now seen his side miss four of their six penalties in the Premier League this season.

‘Yet United were lucky their latest failures from the spot did not bite them on the backside.’

It sounds an awful lot like you, not ‘the strikers’, have ‘managed to turn a major positive into a bit of a negative’, there. United sure were ‘lucky’ that they scored three open-play goals to render two penalty misses completely meaningless. Fortunate b*stards.

Don’t feed the Crooks
It’s Monday. It’s Garth day. Thank you to BBC Sport for continuing to indulge us.

Here is Crooks on Christian Pulisic:

‘When he arrived at the club I thought “what’s the game coming to; we’re now spending £58m for an American!”‘

‘Quite apart from anything else he is back to his best after what I thought was a shaky start to the season for such an accomplished youngster.’

His ‘shaky start’ comprised of two assists, one goal and not a single Premier League minute missed for a side that has dropped two points in ten games.

Now to his thoughts on Harry Maguire:

That is delightfully ridiculous. And to finish, here is Garth on statistics:

We love you, you great man.

Most nonsensical headline of this or any other day

Anyone who has any idea what is going on in that headline, please send an explanation to theeditor@football365.com.

Recommended reading of the day
David Adebayornstein on Tottenham and other things. (£)

Nicky Bandini on Atalanta and Genoa.