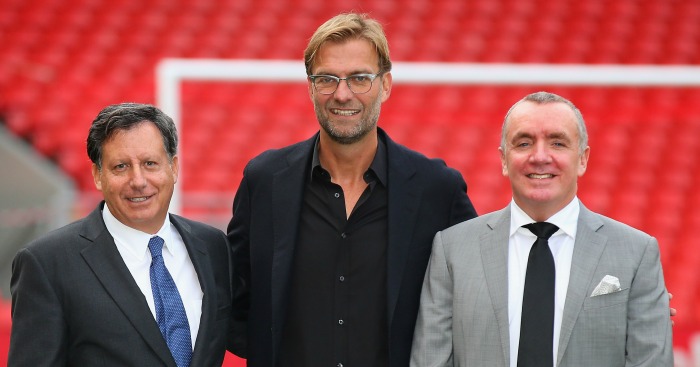 Liverpool have a “very unique and special individual” in manager Jurgen Klopp, according to former chief executive Ian Ayre.

All eyes will be on Kiev on Saturday as the Reds attempt to chalk up their sixth European crown against a Real Madrid side looking to wrap up their third in a row.

While Zinedine Zidane’s men were always among the favourites for this year’s crown, Liverpool have come up on the outside thanks to the way Klopp has shaped his exciting, young team.

Few are prouder of the German’s work than the man pictured alongside him at his unveiling just over two-and-a-half years ago, leaving boyhood Reds fan Ayre delighted.

“What became evident very quickly was how honest and without ego he was, and I think in this sport that’s quite unusual.

“He’s the sort of person who will defend his view but also listen to other people’s views.

“We could have good days and bad days, but we would always act as grown-ups and not let it get between us.

“We had a fantastic relationship and nobody’s more satisfied or pleased both for him and the club with what they’ve achieved this season already, regardless of the outcome on Saturday.

“I think he’s done everything that Liverpool and the owners expected of him.

“He continues to move the club forwards and genuinely I think if you speak to anybody who works with him, whether it is on the business side of Liverpool or the football side of Liverpool, everybody has huge admiration for him.

“And he’s a top, top coach to work with. Anybody would do well to find a coach as good as him with the skillset and the personality he has.”

Ayre played a key role in bringing Klopp to Anfield and secretly first met him in the United States – the place he will soon be calling home after this week being confirmed as CEO of Major League Soccer new boys Nashville.

Having been unveiled in Tennessee, he is travelling to Kiev for the Champions League final and, having been at Liverpool’s previous five European triumphs, is “hopeful that I can add number six” on Saturday.

“We were always conscious that we were trying to develop Liverpool in the best way we could with the funds that we had at our disposal, so it was about operating smart as a business,” Ayre said of his time at the club.

“Often we would come under criticism for buying young players and not buying bigger name players all the time – but look at some of the players we took who weren’t the huge numbers that you now see.”

“Even taking (Philippe) Coutinho way back from Inter Milan. He wasn’t really getting a start in their team and that didn’t really make big waves at the time, but turned out to be great.

“Likewise we took a number of players like (Roberto) Firmino and Sadio Mane, and I think great testament to Jurgen that he has always been – and still is – a coach who wants to bring in good talent and make it great talent.

“That combination of taking players at a certain level and bringing them on, and then taking very young players and developing them almost completely are two of his very good skillsets.

“The combination of smart buying at smart prices to be able to compete and then having a coach that can develop that talent to its full potential I think makes a great combination for Liverpool.”

Ayre still finds it a “little bit surreal” being back watching Liverpool as a fan, but cannot wait for Kiev and what he expects will be a goal-filled final.

And whatever the outcome, he believes the Reds are in a far better position to build on their success than after their triumph 13 years ago in Istanbul.

“I don’t think the size of that achievement was really capitalised on ,” he added.

“But the club now has a fantastic infrastructure and fantastic people.”

Robbie Elliott: Asprilla lost his deposit as there were bullet holes in the walls (Planet Football)