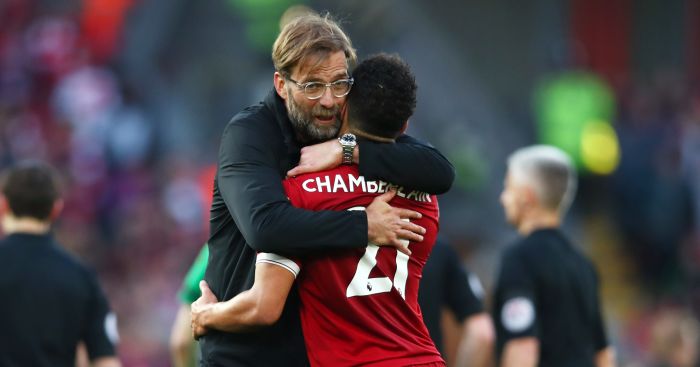 Liverpool boss Jurgen Klopp says Alex Oxlade-Chamberlain is ahead of schedule in his return from a serious knee injury.

The England man suffered a knee problem during the semi-final first leg against Roma in last season’s Champions League and he has been sidelined ever since, missing the World Cup with England.

Oxlade-Chamberlain – who joined Liverpool in a £35m deal from Arsenal in the summer of 2017 – was not expected to feature at all this season.

But Klopp delivered some positive news regarding the former Arsenal man at his pre-match press conference for Saturday’s clash with the Gunners.

“It’s the best news. He started going out on the pitch and from the first step looked completely normal,” said Klopp

“With Ox, from the first step, it looked like Ox. It was really nice and there was no reaction.

“No pressure on him, huh? It looks like February being back in normal training. Late February, maybe March. It gives us hope he will be back in this season.”

Klopp hinted that the midfielder could return to the field before the end of the season.

“It’s a surprise [his rehab]. It looks really good. Of course it needs time and each little muscle must now adapt to the intensity,” added Klopp.

“If you look at the sessions he does outside he looks like he can play tomorrow but of course it is not possible. It’s a boost for the entire dressing room because he is such a big part of that.

“It’s a surprise. He’s ahead of schedule. That’s always good news. We try not to push him too much but we don’t want to hold him back.

“If he makes further steps like he did in the last few weeks he can play Premier League football this season which is nice to know.”