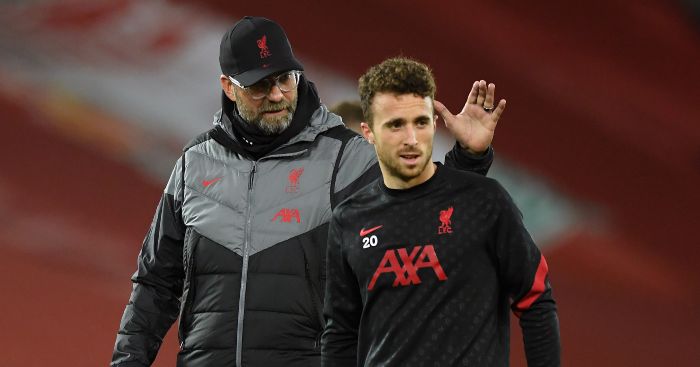 Jurgen Klopp says “it is so easy to like” and work with new Liverpool signing Diogo Jota.

Liverpool capped off a solid but difficult week by following up Champions League victory over Ajax with a 2-1 win from behind against Sheffield United.

Roberto Firmino cancelled out Sander Berge’s penalty opener at Anfield but it was Jota, on his second Premier League start for the club, who proved the difference with a late winner.

Klopp was full of praise for the Portuguese, who joined from Wolves for £41m in the summer.

“It is not too much about what he’s brought in the team,” he said, as quoted by Liverpool’s official website.

“He is a good player, that’s why we signed him. I said it only a few minutes ago when I was speaking with my coaches that it is so easy – he is such a likeable person and so it is so easy to like him. That makes everything easier.

“Then the player he is: he is quick, he has the physicality, he is strong, he is good in the air, he is good on the ground… a lot of good things. He has exactly the quality we need, so that helps a lot.

“Tonight was a game where all four played up front together and you know how good Shaqiri was in Amsterdam and he is close. Taki is very close and so all these things help, of course. This is the area where we have in the moment options and long may it stay like this.

“Diogo scored a super goal and was really involved in the game. He can be much better, 100 per cent, and that’s good news.

“He is still adapting. In the moment, a lot of things we do are not natural to him but that’s only because Wolves play different – but a lot of things he did for Wolves are exactly what we want him to do.

“Yes, that he is that close already is just a sign how good a player he is. As I said, if he stays fit, he’s 23 and the future is bright, let me say it like this. We will need his quality and I am really happy that he settled nicely so far.”