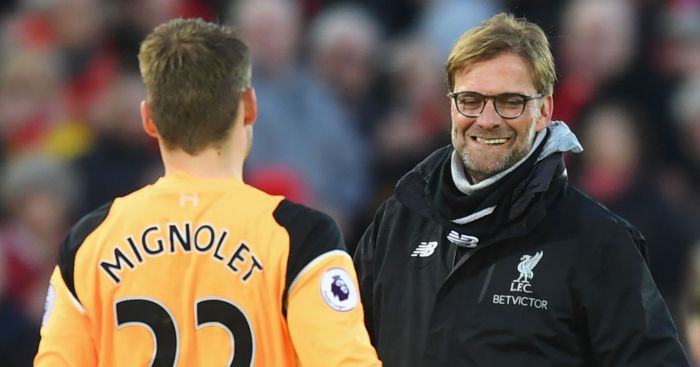 Jurgen Klopp says the perception of goalkeepers is heavily based on their reputations.

Klopp, our early winner for the weekend, watched on against Stoke on Saturday as Mignolet produced a couple of excellent saves to preserve a valuable 2-1 victory.

Mignolet has struggled to fully convince during his time at Anfield, and lost his first-team place to Loris Karius earlier in the season.

But the Belgian returned to the line-up after a series of mistakes from Karius, and Mignolet has not looked back since.

“There was never a doubt that Simon is a top keeper,” Klopp said.

“He is how goalkeepers are. He is very confident and this was a goalkeeper’s day.

“I cannot remember the last time he made a big mistake.

“I was a few years in Germany when the whole world was 100 percent sure Manuel Neuer was the best goalkeeper in the world.

“He made mistakes but nobody spoke about it. When you play at that level, nobody speaks about your mistakes.

“With all goalkeepers it is about the image. Simon is a fantastic, hard-working guy and this was his day.”