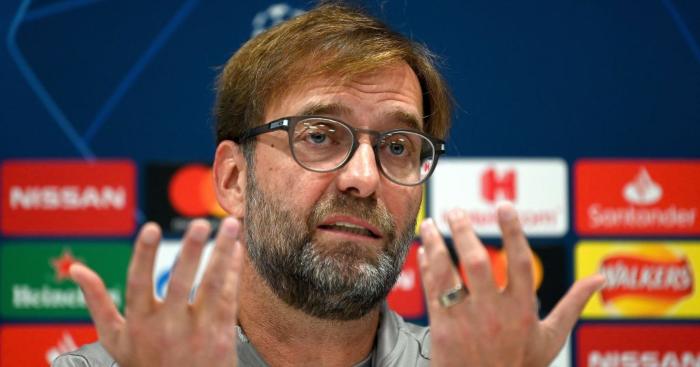 Liverpool boss Jurgen Klopp has labelled proposals for extra games in the Champions League as “absolute b*******” amid his side’s mounting injury issues.

The Reds boss has been vocal recently in declaring that football’s authorities need to lessen the workload on the game’s biggest stars.

Liverpool , who won their 16th Premier League game of the season on Saturday, beating Watford 2-0 at Anfield, head to Qatar for the Club World Cup this week.

The Reds have already played 27 competitive matches this term, and will have played 32 matches before the New Year.

Klopp currently has a number of key senior players sidelined with muscle injuries, with Joel Matip, Dejan Lovren and now Gini Wijnaldum all out.

Naby Keita is also being wrapped in cotton wool at present and Xherdan Shaqiri is only recently back from an extended absence.

So when asked about his side’s workload after Mohamed Salah’s goal had put the Hornets to the sword, Klopp was eager to make his point.

“With Gini injury today, with Dejan four days ago, our squad is not getting bigger. That is of course not cool,” Klopp told The Mirror.

“But that’s the same if we were going to Villa to play. They are all watching us suffering but in the end nobody cares really.

“I read today that the top clubs want more games in the Champions League.

“I am absolutely not involved in those discussions.

He was also scathing in his latest assessment of Club World Cup organisers, after news that all games are to be played at the same stadium.

“All the games are on one pitch now…and it is raining out there. It’s sensationally organised.”

On Wijnaldum’s injury, after the Dutchman hobbled off late on at Anfield, Klopp said: It’s a muscle problem. I don’t know.

“He could probably fly to Qatar, my problem is I don’t know what injury it is. You never want a muscle injury for a player, but at this moment it’s more difficult.

“All teams have the same problems. Tomorrow we will know more.”