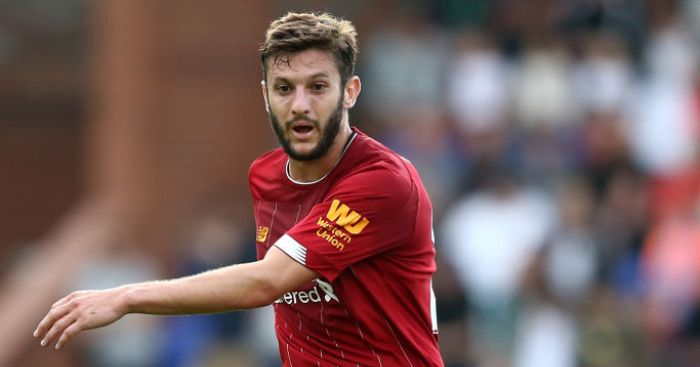 Lallana made his second appearance of Liverpool’s pre-season on Sunday, starting in a 3-1 win over Bradford to help raise money for the Darby Rimmer MND Foundation, a charity set up by former Liverpool and Bradford player Stephen Darby and his friend Chris Rimmer after both were diagnosed with motor neurone disease.

The midfielder alternated in a deeper role with James Milner in the 6-0 win over Tranmere earlier this month, but featured exclusively in that position at the weekend.

He impressed enough for Klopp to be considering that a long-term position for Lallana, who he expects to be turning down bids for from former Chelsea manager and Jorginho addict Maurizio Sarri.

“Adam is the kind of player he can play that and he enjoys this ‘Jorginho’ role – I hope Maurizio Sarri doesn’t see the games or he will make an offer,” he said.

“It is about getting Adam rhythm, bringing him in early and doing things he is naturally good at – small spaces, passing the ball, and then from time-to-time offering the runs in behind as well and together with Milly (Milner) that is possible. For us, it is another option.

“He needs a bit of luck, as we all do in life. We have to come through without injuries, that would be cool, and then we have a couple of new players, I would say, this season.”