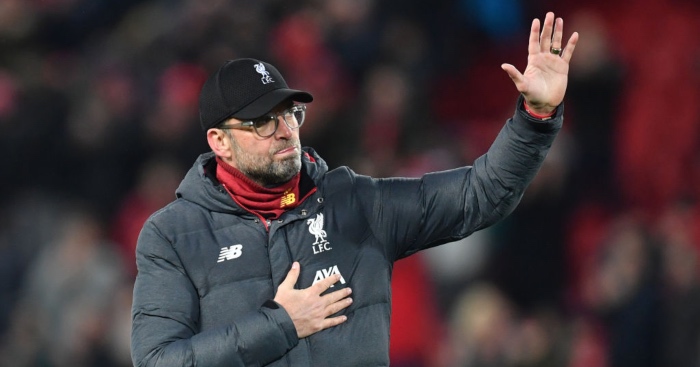 Jurgen Klopp bemoaned the style of Atletico Madrid’s football as Liverpool were dumped out of the Champions League.

The Reds lost 3-2 on the night, 4-2 on aggregate, as they failed to defend their title.

Wijnaldum drew the tie level at 1-1 on aggregate with a header just before half-time.

But Liverpool wasted numerous chances as they failed to gain the advantage in normal time.

Roberto Firmino thought he’d scored the winner when he side-footed home after his header came back off the post.

But Marcos Llorente came off the bench for Atletico and scored a quick-fire double to stun Anfield.

The first was gifted to him following a shocking pass from Liverpool goalkeeper Adrian, and the second came on the break as the Reds pushed hard to find a way back into the game.

Alvaro Morata finished Klopp’s side off with another breakaway goal for Ateltico Madrid.

But the Liverpool boss insisted he was “happy with the performance” and questioned why Diego Someone sets his side up to play in such a defensive manner.

Klopp told BT Sport: “For the score to go 2-1 was not cool, it was a blow but it’s not a big problem. The second goal was a bigger problem.

“After the second goal the legs were a bit tired. Everything that looked really natural in the first 90 minutes became a bit stiff. The crosses did not have the same quality. We wanted the first time crosses like for the first goal, which was brilliant and the boys forget to do that.

“I am completely happy with the performance. It’s so difficult to play a side like this.

“I don’t understand with the quality they have the football they play. They could play proper football but they stand deep and have counter attacks.

“We accept it of course but it doesn’t feel right tonight. I realise I am a really bad loser, especially when the boys put such an effort in against world class players on the other side who defend with two rows of four.

“We know in the last two years we had some lucky moments in the Champions League, you have to, to reach two finals, but today it was everything was against us in the decisive moments.

“I’m searching for the right words. Our main mistake was to not score the second goal five minutes earlier. We scored it in extra time and not in the 90 minutes.

“The 90 minutes were exceptional, the boys played a wonderful game. You saw all the goals we conceded you should not concede them. We lose in a specific way, it’s always different but it’s difficult to explain those goals to be honest.

“We will come again and go again but now we are out.”