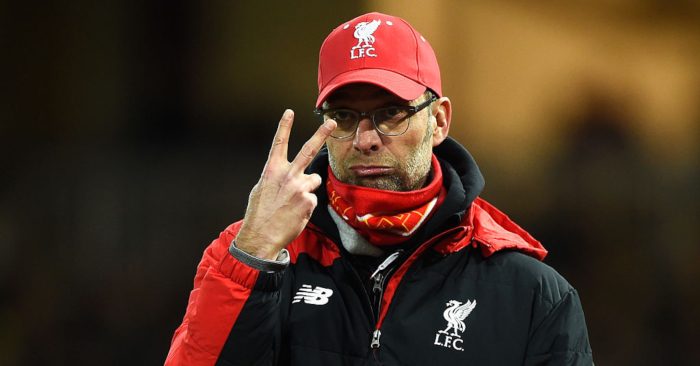 It is difficult to pinpoint precisely when Bill Shankly proudly stated that “if you are first you are first, if you are second, you are nothing”. It is less difficult to recognise that claim as little more than the grandstanding of a motivational genius who constantly demanded the utmost effort from his players.

The legendary Liverpool manager’s four league titles were won by margins of eight, four, six and three points in an era when a win gleaned only two. The gaps were not chasmic, but more than enough to underline the difference in quality between champions and runners-up, everything and “nothing”.

There was no sense of second being meaningless as Liverpool’s domestic season ended on Sunday. Not when Sadio Mane scored either of his two goals, nor when Manchester City scored their second, third and fourth around 270 miles away in Brighton. Not even when Wolves fans helpfully reminded their hosts that Raheem Sterling was top of the league, or that they ‘had f***ed it up’ and were ‘gonna win f*** all’.

And yet the disappointment was palpable. The Reds had secured the third-highest Premier League points total in history, boasted the winner of the Golden Glove, two of the three who shared the Golden Boot and the PFA Player of the Year, conceded the fewest goals and lost only once all season, yet still had little to show for their gargantuan efforts. In any other team in any other country in any other league in almost any other year, 97 points would have been rewarded with more than bittersweet silver medals and mere memories of what had been.

But the regret was tempered by the events of five days prior. There was no sorrow or despair at least in part due to the astonishing victory over Barcelona, a result that ensured their campaign would not rest entirely on that Wolves game. As one match report said: ‘Whatever happens in Madrid, it does feel as though Liverpool are the only club capable of challenging City in the years to come.’

Yet that rather obscures the situation. Had Ajax advanced, potential defeat could have been explained as being caught in the eye of the perfect storm of youthful exuberance. Were Barcelona their opponents, losing successive finals to two of the greatest players in the sport’s history would have dulled any shame. Had Manchester City, Bayern Munich or Juventus benefited from enough fortune to reach that stage in Europe, falling at the last obstacle would have been at least vaguely understandable. There would have been a reason for failure, a justification for any loss, a qualifier of sorts. But one cannot pretend that Liverpool are destined for greatness ‘whatever happens in Madrid’ when Tottenham await in the final.

They are the worst possible team to face in a one-off, high-stakes game. Jurgen Klopp has lost to Mauricio Pochettino once in nine attempts since they both moved to the Premier League, winning four of their last six meetings. Liverpool beat Tottenham home and away this season, finishing with 26 more points, 22 more goals, 17 fewer conceded, fewer injury concerns, and considerably better recent form. To win is almost expected; to lose is unthinkable and close to unforgivable.

Klopp has been uncharacteristically reserved with regards to the Real Madrid defeat last season. He rarely discusses the game, the performance or the aftermath, constantly choosing to look ahead rather than over his shoulder. He broke his own self-enforced protocol after the Barcelona victory, noting that “we felt we have to go back” to the final, and that “we cannot let it stand like this”. But losing to a domestic rival – a patently inferior one – could have an even more lasting effect, and not in terms of motivation or inspiration.

Next month’s game is, in effect, an elite-level example of sh*t or bust. Two teams have lost consecutive finals in European Cup history, and while Valencia followed heartbreak in 2000 and 2001 with two La Liga titles in three seasons, Juventus’ post-1998 struggles are more instructive. After losing to Dortmund and Real in the previous two years, they equalled their worst Serie A finish since 1962 and won two Champions League games (against Rosenborg and Olympiakos) on an unfathomable and faintly undeserved route to the semi-finals in 1998/99. They did not win Serie A again until 2002, with their next Champions League final coming a year after that. They flew so close to the sun twice that their wings were burned to a crisp.

Marcello Lippi, then 51, left Juventus at the end of that season after five years in charge. He remains the only manager to lose three European Cup finals. Klopp, now 51, and approaching his fifth year with Liverpool, has to prevent history from even having a chance to repeat itself.

After all, this was his very first Liverpool promise. At his opening press conference, Klopp swore to deliver “a title” within four years lest he move to Switzerland. Having hailed “the biggest development jump I can remember” after the Wolves victory, one might suggest the manager feels this side is further ahead in its evolution than could have been expected. Yet if they lose in Madrid they would be behind schedule by his own definition.

If that seems harsh after such a phenomenal campaign, that is the level Liverpool are hoping to permanently inhabit – whole seasons that boil down to one or two final games where there is as much to win as there is to lose.

Finishing second behind this City side in the Premier League is far from a disaster – and means much more than “nothing” – but losing to Tottenham in the Champions League would be. There can be no excuses, no caveats, no justification. Klopp and Liverpool absolutely have to clear their final hurdle.