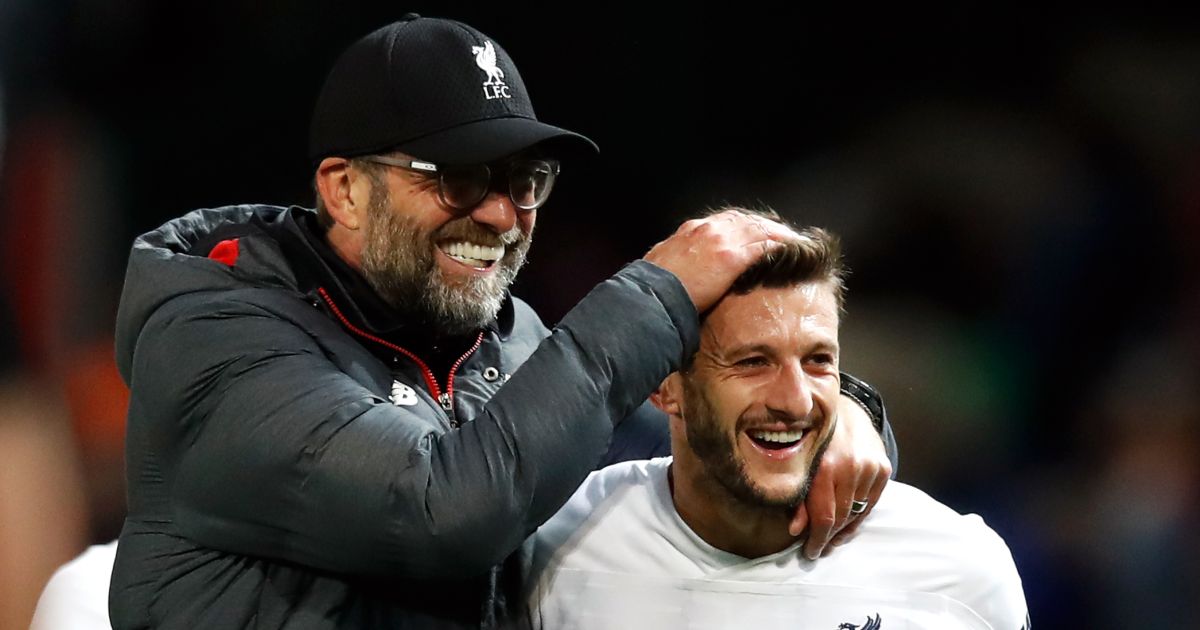 Jurgen Klopp claims Brighton midfielder Adam Lallana would be “on another level” if he hadn’t had regular injury problems at Liverpool.

Lallana joined the Reds for a reported £25m back in 2014 and made 178 appearances in all competitions during his six-season stint at Anfield.

The England international is now at Brighton and playing regularly after suffering with injuries towards the end of his career with Liverpool.

And Klopp claims Lallana is “one of the best” he’s ever worked with and is gutted he never saw the 33-year-old reach his full potential.

“It was what I loved about him, a player with technical skills and that working mentality that is really rare. If he was injured less he’d have been on another level. One of the best I’ve worked with.

“I am really looking forward to seeing him again.”

Starting now and for the rest of the season, every plastic bottle our fans put in @SCJohnson recycling bins at Anfield will be upcycled 🙌

On facing Graham Potter’s side, Klopp added: “I am not sure if you saw Brighton v Manchester City game. It looks from score, it’s a clear win but there were two goals that were counter-attacks, possession, it was 52% to 48%.

Brighton play football, a real threat, try to create and defend well. They have not scored a lot but don’t concede a lot. I saw the second half as well and they were incredible, to keep the ball and pass like they did against City is a really hard thing to do.

“We lost the last game here against Brighton, so that is another warning but the big difference is Anfield will be packed to help.

“That helps us usually. We have to be really good and we need people with the right understanding because they will have their moments. We need to be spot on defensively and with the ball as well.

“I could not respect more what he is doing there. He is a top-class manager.”

Joe Gomez is trying to win his place back in the Liverpool side after a long-term injury and Klopp has urged the centre-back to “keep working”.

Klopp continued: “It is not easy. That is clear. But it was always clear that in our situation we had to bring in a defender, we all agreed.

“Joey hasn’t played much, that’s how it is, he had a long-term injury. We have to deal with him with the intensity and now we’re not even halfway through the season and we are talking about these things.

“Hopefully no injuries but that’s a footballer’s life. You have to be on top of your game for the moment you come in. The only thing you can do is keep working really hard.”