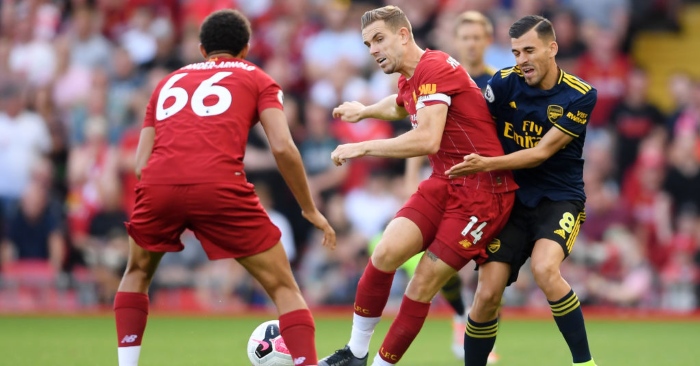 Changes to the laws of the game, no matter how small, nearly always present coaches with new opportunities or new ways of playing the old game. For Liverpool, the latest alterations to the rule book have provided a reason to freshen things up, especially as their squad has remained largely the same as last season.

Not all new laws have as big an effect as the change to the offside law in 1925, which stipulated that two rather than three defenders had to be between the attacker and the goal for them to be onside, or the introduction of the back-pass law in 1992, after which goalkeepers could no longer pick up the ball if it was kicked to them by a team-mate; but each tweak is seen by some coaches as an opportunity.

When Jürgen Klopp and his group of counter-pressing advocates noticed the change to the goal-kick law ahead of the 2019/20 season, their eyes will have lit up. They will have seen an opportunity to deploy that press in an even more devastating fashion, and catch a few opposition sides off guard.

The new law states: ‘The ball is in play once the kick is taken; it can be played before leaving the penalty area.’

IFAB explained that the change was designed to create ‘a faster and more dynamic/constructive restart to the game’.

The team in possession no longer have to wait for the ball to roll out of the penalty area for it to be in play from a goal-kick, while the team out of possession have to wait until the goal-kick is taken before entering the area.

This is designed to help get the ball in play quicker and seems to encourage passing out from the back, but how will this affect Liverpool’s counter-pressing?

In an article for The Athletic, Michael Cox wrote: ‘This has major consequences for the concept of pressing the opposition at goal kicks, because it means the opposition must press a larger area. Indeed, it might mean less pressing and encourage teams to instead adopt a medium block at goal kicks.’

Less pressing? Not for Klopp’s Liverpool.

The idea behind counter-pressing is that the ball is won back quickly, often high up the pitch, in order to spring an attack when the opponents are least expecting it, i.e. in transition, when their minds are still on their trendy juego de posicion rather than the opposition’s equally fashionable gegenpressing.

In theory, the higher up the pitch, or the closer the the opposition back line the ball is won, the better the chance of scoring a goal from the counter-press. It’s for this reason Klopp once described the tactic as his most effective playmaker.

Under the previous laws those doing the pressing had to lurk on the edge of the area, making sure they were not close enough to prevent the goal-kick being taken short, but not so far away that they were unable to reach the player in possession before they passed it on to a team-mate. The pressing was manual, either setting traps into which the opposition played, or forcing them to go long.

The new law almost provides an automatic pressing trap. It gives the player receiving the ball the idea they have the time it takes for their marker to run from the edge of the area, to make their next move. Ample time, surely, but pressing traps are not just about the first move, they are about the second, third, and fourth moves in the sequence, and passing options are quickly reduced.

Liverpool demonstrated this against Arsenal (read 16 Conclusions). They had the opposition penned in their own defensive third trying to evade the counter-press, and on a number of occasions were pressing even higher, past the 18-yard line.

Mo Salah’s gegenpressing is often under-rated by fans and media. This is his pressmap vs Arsenal. 16 in the opposition box!
Bobby was sensational vs Arsenal and had 42 presses, Mo had 41 (his 2nd highest match total ever) pic.twitter.com/aS9h9eqSaa

The image below shows Liverpool’s formation when pressing. Mohamed Salah, Roberto Firmino and Sadio Mané form a narrow three around the edge of the penalty area, while the two full-backs (circled) are waiting to pounce on any pass played wide.

Full-backs pushing up in such a manner could potentially leave Liverpool light at the back, so to combat this, and because the opposition cannot be offside from a goal-kick, defensive midfielder Fabinho (circled) has dropped into defence to form a back three. Virgil van Dijk and Joel Matip can now cover behind full-backs Andy Robertson and Trent Alexander-Arnold respectively.

In midfield, Jordan Henderson and Georginio Wijnaldum clear up any scraps and also join the press. They close any remaining gaps once the defensive line can push up to the halfway line when offside comes into play once the goal-kick is taken.

Arsenal’s Dani Ceballos looked like he hadn’t experienced anything like it, and on one occasion, after finding himself pressed into a corner, he presented Mané with a chance better than any he created for his own team. It wasn’t a surprise to see the Spaniard substituted after an hour.

Average pressing positions for Arsenal are absurd. We’ve seen this extent of high pressing only once before under Klopp, anyone want to guess which match? pic.twitter.com/ssjGG9xLHJ

It has been suggested that Liverpool are playing a higher line this season, and to the naked eye this appears to be true. It’s a difficult thing to judge using data as there are too many variables to ascertain if a dataset — whether defensive actions, offsides won, or something else — is accurate in determining the depth of a defensive line, but the new goal-kick law has shifted Liverpool’s press further up the pitch.

This could have a knock-on effect on the defensive line, especially once the goal-kick has been taken and offside comes into play, and could be the reason the line looks higher this season.

Klopp is working with the same squad as last season, so to keep things fresh he’s tweaked his tactics slightly in order to help them push Manchester City to the final day once again in the Premier League, or even to help them win the damned thing.

For whatever reason, Liverpool refused to try to improve their chances of catching the current champions by bringing in more quality players in order to match City’s squad depth. Instead, Klopp and his staff have had to look on the training ground for the little bit extra they need to catch the champions.

The average positions show Liverpool have played similar shapes in both of their home games this season, with Brazilians Fabinho and Firmino defining the central parts of this shape, Alexander-Arnold and Robertson offering width, while Salah and Mané (or Origi vs Norwich) act as inside forwards.

The Norwich and Arsenal games provided textbook versions of this formation, as shown by the average positions below, from WhoScored (Norwich first).

On paper it’s a 4-3-3, but as shown in the pressing image, it changes based on what’s happening at that moment in time, and the opposition formation (such as Arsenal’s 4-4-2 diamond), but it always remains structured.

Liverpool face an uphill battle if they’re to repeat last season’s success – especially as they have not added to their squad – but all the players within this slightly thin squad are ready to run up that hill repeatedly in an attempt to reach new heights.