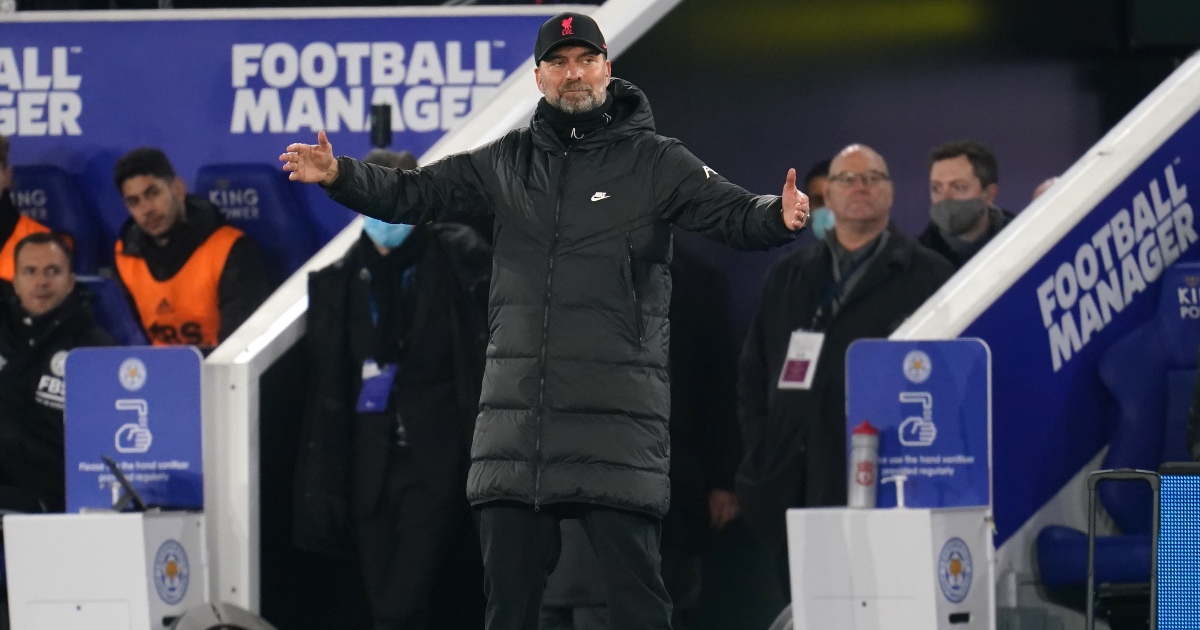 Boss Jurgen Klopp admits Liverpool can forget about catching Manchester City if they drop their standards after a damaging 1-0 defeat at Leicester.

Ademola Lookman’s winner stunned the second-placed Reds to keep them six points behind City in the title race.

Kasper Schmeichel saved Mohamed Salah’s first-half penalty and Sadio Mane missed a golden chance after the break as the wasteful visitors suffered just their second defeat of the season.

It ended a 10-match unbeaten run and they could be 12 points adrift of City by the time they play third-placed Chelsea on Sunday.

Klopp said: “To top that, Chelsea and us play against each other. It was not our plan to give City the chance to run away. If we play like tonight we cannot think about catching up with City.

“If we play our football and we can win games, we can see how many points we can get and what that means.

“I don’t have a proper explanation for tonight – to find it is my main concern, not City.

“We were not ourselves. We started OK, I didn’t like the intensity even in the beginning but it was the start. Then we lost the rhythm and never found it again.

“We forced it a little bit too early, instead of passing the extra pass. We tried to change that at half-time but for some reason it didn’t click.

“When they scored the goal it was clear we were under pressure, we were pushing them but didn’t use the chances. They deserved the three points.”

Leicester responded to their 6-3 defeat at Manchester City with a resilient and determined display to collect just their third league clean sheet of the season despite a makeshift line-up with midfielders Daniel Amartey and Wilfred Ndidi both playing out of position in central defence.

Schmeichel kept them level in the first half when he saved Salah’s 16th-minute penalty after the forward had been tripped by Ndidi. Salah nodded the rebound onto the bar having missed his first league spot-kick in four years.

Liverpool continued to push after the break and Mane should have opened the scoring but he blazed over having been put through by Jota.

It proved costly as substitute Lookman snatched the points on 59 minutes, just 178 seconds after replacing Hamza Choudhury, when he jinked past Joel Matip to drill inside Alisson Becker’s near post.

Liverpool failed to find a good enough response and Jota headed wide and Virgil Van Dijk was denied by Schmeichel late on.

Rodgers said: “In the context of the game, on the back of Sunday, the players put in a heroic performance. If you think about the recovery time, the players were amazing how they coped with it.

“We had to be resilient, tough and defend for your life at times but also show good moments of football.

“If you look at the weekend, even though the scoreline was 6-3, two were penalties and two were set-pieces. We let ourselves down with the set-pieces so we needed to break the cycle.

“I just thought ‘let’s just go back to the basics again’ – a bit of an old-school structure, defenders go and defend, guys on the posts. The two centre-halves were amazing.”