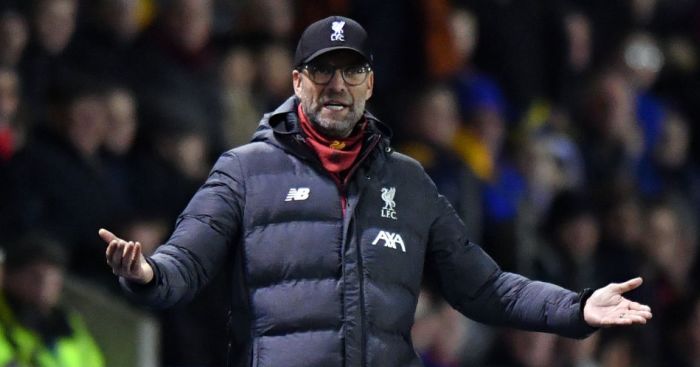 Jurgen Klopp admitted that a draw was the least Shrewsbury Town deserved against Liverpool.

The League One side earned a glamorous Anfield replay against the European champions by fighting back to earn a 2-2 draw on home soil.

Substitute Jason Cummings scored two goals to bring Shrewsbury back from the brink, as they became the first side to face Liverpool and not lose in 2020.

And with Shrewsbury managing more shots on target than the Premier League leaders, Klopp was forced to admit the hosts – who are closer to the relegation zone than the automatic promotion spots in the third tier – had caused Liverpool too many problems.

“It’s difficult to win the game. We don’t have enough time to say all the things which weren’t right today,” Klopp told Match of the Day.

“We scored a really good goal but apart from that, Adrian had absolutely too much to do. He was brilliant. The counter-attacks they had when we lost the ball…

“They slowed the game down in their formation and we lost the ball in the wrong moments. It just didn’t look like it was 2-0 on the pitch. It looked like we were 2-1 down.

“But well deserved for Shrewsbury, it was the minimum they deserved. Congratulations to them.”