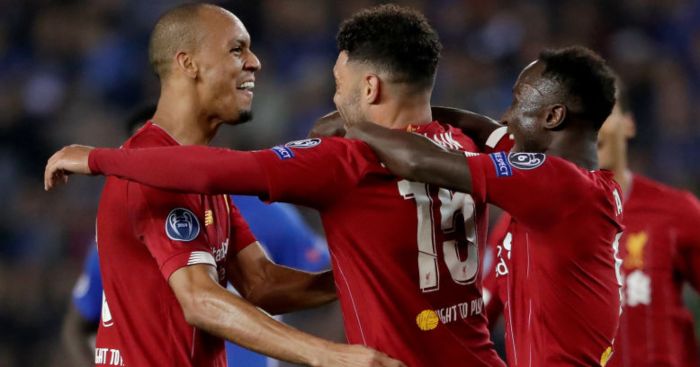 It was not exactly the sort of “unpredictability” Pep Lijnders had in mind when discussing what Naby Keita “creates” and offers to Liverpool. In this, his first club start outside of the League Cup since April, his introductory touch was made not with his feet or his head, but with the arch of his back to direct a lofted ball towards Andy Robertson.

Jordan Henderson would surely have winced at the insouciance; Georginio Wijnaldum might have stifled a smile for fear of leaving his pigeonhole as a tireless, defensive-minded workhorse. For preconceptions have sorted Liverpool midfielders into two distinguished groups: heavy lifters and creative lights.

It was entirely needless yet somehow completely necessary. Keita has long been the mysterious element of this Liverpool midfield, another example of a player whose stock has risen through their absence. What better way to mark both your return from injury and your territory as a unique talent than by passing to someone with your actual back?

If Lijnders believes Keita “makes our build-up play completely different,” one can only wonder what the coaching team considers to be Alex Oxlade-Chamberlain’s main strength. He provided more of a distinctive spark from deep against Genk than any Liverpool player since Philippe Coutinho, and with much more energy and discipline.

Jurgen Klopp has solved positional puzzles differently at Anfield. His patience lasted only so long – perhaps too long – until Alisson was signed at great expense to alleviate their goalkeeping problems. Virgil van Dijk was a similarly exorbitant answer to a long-standing question. But the importance of Joel Matip, Trent Alexander-Arnold and Robertson proves that money does not necessarily make his managerial world go round.

After being left Roberto Firmino in his inheritance, Klopp knew well enough to add Sadio Mane then Mohamed Salah to the equation. But it is in midfield where he has struggled to find a happy medium. Four of his eight most expensive Liverpool signings have come in that position, yet uncertainty reigns as to who should play.

Keita and Oxlade-Chamberlain were given their chances against Genk. The former made a positive impression, while the latter was particularly impressive in his intent and inventiveness. Yet the inclusion of both posed a problem. Fabinho was excellent but he absolutely had to be, and in the moments he could cover neither his nor his teammates’ tracks, Liverpool were exposed.

The right-hand side of that defence must be taken into account – James Milner and Dejan Lovren is hardly a title-winning combination – but stability was sacrificed in Belgium. The high line did not help; Keita and Oxlade-Chamberlain’s regular forward dalliances were similarly disruptive.

It felt like a selection made entirely as a consequence of the insipid Manchester United performance. Liverpool were listless in the centre against limited opposition, devoid of ideas and inspiration. They were more solid on Sunday because of their more conservative approach.

The question now is how Klopp progresses with his midfield. The answer might lie in him embracing the sort of crude stereotypes that have long pervaded social media. Keita, Oxlade-Chamberlain and Adam Lallana are his accelerators and Henderson, Wijnaldum and Milner the brakes. The obsession with picking too many from the first group during Coutinho’s era bred chaos, the instinctive reaction to which was to embrace control by focusing on the latter.

With Fabinho as the permanent clutch, Liverpool can now afford to enjoy the best of both worlds to provide the perfect balance.

Football is never that simple; different players and systems will be needed for different games. Klopp must find the right pitch between heavy metal and generic pop.