Jurgen Klopp admits he is now spoiled for choice with midfield options but there is one player that holds the key. 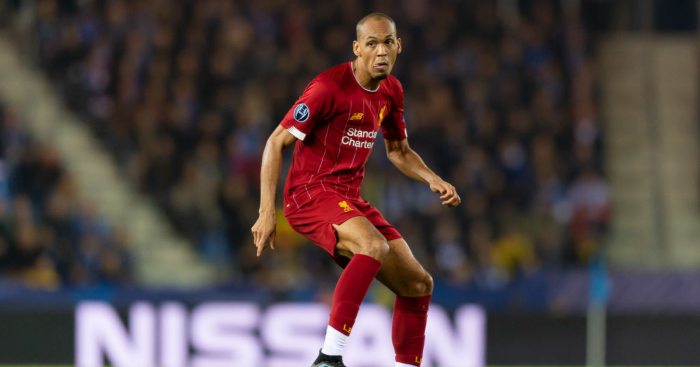 Liverpool manager Jurgen Klopp admits he is now spoiled for choice with midfield options but the one player who holds the key to everything is Fabinho.

The return to fitness of Alex Oxlade-Chamberlain and Naby Keita, in particular, allowed Klopp to play an attacking match in the 4-1 midweek Champions League win over Genk.

However, that game was not without its issues as Fabinho, who covered the most distance of any player on the night, was left to patrol the wide open spaces as his team-mates pushed forward but despite his best efforts at times they were over-exposed.

Klopp accepted as much but he has so much faith in the Brazil international he has not ruled out revisiting the same midfield three in the future.

“The Genk game was a good example of how important he is. Very!” said the Liverpool boss.

“It was clear it was not perfectly-tuned with Naby and Ox around because they didn’t play a lot together in this formation, but it is a possible formation for sure.

“Fabi had a lot to do to sort some little gaps which we left open. In that (Genk) game he played as pretty much the only midfielder in some moments.

“The job of the six in modern football is incredibly important and the more offensive the players around you are, the more important it gets.

“But he is not only a gap-closer and a challenger, he is a very good footballer as well.”

Since establishing himself in the side about 12 months ago after a slow start to his debut season, the Brazil international’s importance to the side cannot be under-estimated.

He has started 13 of 15 matches this season – one of the games he missed was the Carabao Cup tie against MK Dons when most of the first team were given the night off – and 40 of the last 48.

Klopp would not admit it publicly but he must be secretly delighted that, despite his impressive performances, Brazil coach Tite chooses not to play him when he calls him up for the international team.

He admits, however, the 26-year-old will have to be rested at some point.

“He only flies in the international breaks, he doesn’t play! That’s pretty much how it is. He is somewhere but not playing,” Klopp said of Fabinho’s international exclusion.

“It’s difficult in my life not to create headlines but I don’t want to create a headline in Brazil. So no comment.

“There will be a moment when we have to think about that, 100 per cent. But we have replacements; Gini (Wijnaldum) can play the position really well and Hendo (Jordan Henderson) played it for a time.”