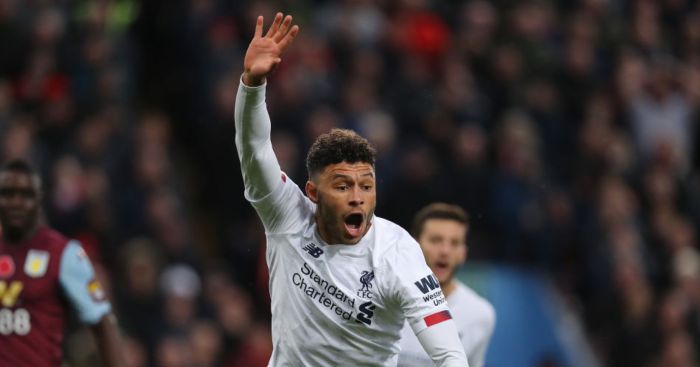 Jurgen Klopp has named the Liverpool player who “helps massively with situations like that” which presented itself against Aston Villa.

Liverpool maintained their unbeaten record and six-point lead atop the Premier League table with a remarkable late comeback against Villa on Saturday.

The Reds equalised in the 87th minute before the diving Sadio Mane scored a stoppage-time winner, with City staging a similar recovery as the two mentality monsters pulled further clear.

But Klopp paid tribute to Alex Oxlade-Chamberlain, whose 65th-minute introduction helped change the course of the game.

Only Mane (six) had more than the substitute’s four shots, as Oxlade-Chamberlain created one chance, did not misplace a single pass and made more dribbles than every teammate bar Trent Alexander-Arnold and Georginio Wijnaldum in a transformative cameo.

“We made it difficult for ourselves,” Klopp told Liverpoolfc.com. “We started playing football good but not exactly like we should have done.

“Aston Villa were ready today for a proper fight, a proper battle, defend with all they have, try to find spaces for counter-attacks and be there and have good set-pieces. We played good football but didn’t finish the situations and then we conceded a goal, then it is not so easy to change these wrong decisions, this wrong path, immediately.

“Second half then we started immediately much more aggressive in the right manner, our counter-press was better and stuff like that. Then we could change twice, fresh legs and shooting from distance.

“Ox helps massively with situations like that. We brought Sadio to the right side, Ox left in the half-space, opening the space for Robbo then going inside. That was really good.

“I think, of course, it is lucky when you score these goals but I think if you watch the game, then I think if one team deserved to win it then it is us. But I can imagine how bad Aston Villa feel because with all they did today they would have deserved something, but that’s how it is sometimes.

“That’s OK, we have to play. But at the end, you have to win the ball back. That’s what I said, with 10 minutes, of course we lost balls, had one counter-press which the impulse was right, three players there but they came out. It can happen because you cannot be 100 per cent successful with counter-press.

“On the other side, we were really being here, being there but don’t finish the situation off. I don’t know how long it took until we shot the first time from distance, maybe it was Ox, I am not sure – that would then mean 60 minutes, that’s quite a time.