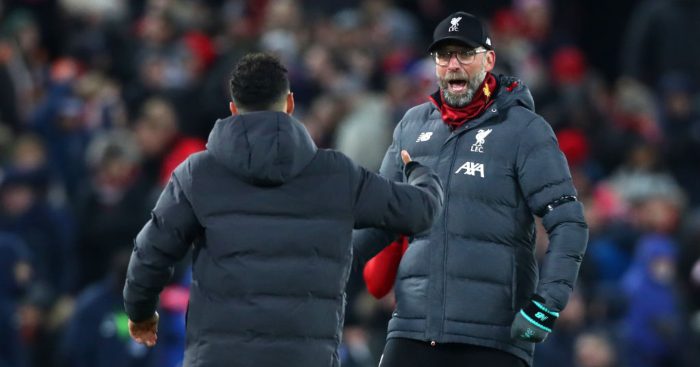 Jurgen Klopp thinks Adrian should have been given man of the match in Liverpool’s 2-1 victory over Brighton despite Virgil van Dijk’s two goals.

The Reds were cruising to victory at Anfield after two first-half Van Dijk goals but the sending off of goalkeeper Alisson Becker and a crafty Lewis Dunk free-kick made for a tense finish.

In the end Liverpool held on with 10 men and with back-up goalkeeper Adrian on the field on what was a freezing afternoon in Merseyside.

On Alisson’s sending off, Klopp told BBC Sport: “I think it was handball but I haven’t seen it. There was no offside and then it is a tricky situation.

“He wanted 100% to head the ball but the other player got there earlier so we can’t change that. Virgil [van Dijk] was probably man of the match with the two goals but Adrian is for me – to come in to a game like this and make two saves.

“Even the goal-kicks are difficult with cold feet! We were not prepared for that situation so I am completely happy.”

On Brighton’s goal, Klopp added: “I think in a situation like this, when you have sense for human beings, you don’t do it like this.

“It was very clever from Brighton but the keeper has just come on and is trying to set the wall. They are trying to get used to each other and the referee lets it go like this. We cannot change it but for me it’s not 100% right.

On Liverpool’s 11-point advantage, Klopp continued: “It’s how it is. But if Leicester win tomorrow we are eight points. We don’t think about these things. It was just to win this game. We have one more day between now and the next game so we have to use that and then we try again.”