Home Liverpool Klopp on Adrian howler: ‘It is a goalie thing at Liverpool’ 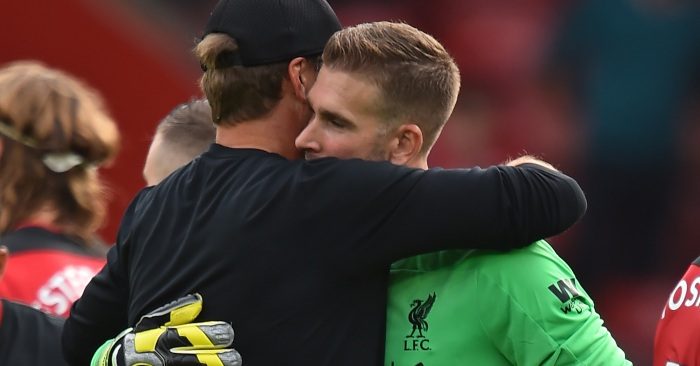 Jurgen Klopp joked that Adrian’s mistake during Liverpool’s 2-1 win over Southampton was a rite of passage.

The Spanish goalkeeper overcame an ankle injury suffered when a pitch invader slid into him during the celebrations of their Super Cup win against Chelsea in Istanbul on Wednesday to take his place in the side at St Mary’s.

But after Sadio Mane and Roberto Firmino goals had put Liverpool in control, he handed Southampton a lifeline as he dallied on a backpass which was charged down by Danny Ings and ended up in the back of the net.

The Reds had to hang on in the end, recording a club-record 11th successive Premier League victory and making light of their midweek jaunt to Turkey, where they played 120 minutes and did not arrive back home until 4am on Thursday.

Adrian has been thrust into Klopp’s side after an injury to first choice Allison, who made a similar mistake in his first few months at the club last season.

And the German said it was only right that Adrian made an error.

“Minute 83, Adrian thought, ‘I’ve played really well so I have to make a mistake like Alli did’ and kept the game a little bit open,” he said.

“I said to him, ‘Finally, it arrived, welcome’. Alli did the same, obviously it is a goalie thing at Liverpool. I have no problem with that as long as we win the game.

“Adrian had a swollen ankle, we played too many balls back to him in that period. I was happy with everything he did today, all the saves he made, all the other stuff.

“The other players need to feel the responsibility for the build-up for the balls back for him.

“He is good with his feet and if you would have seen his ankle on Thursday when we left the plane then you would say that pass for the goal was better than you would have expected. It is all fine.

“He said at breakfast that he was fine and we had to test it.”