Home All The News Klopp on Gotze: ‘If I want to talk to Mario I’ll call him’ 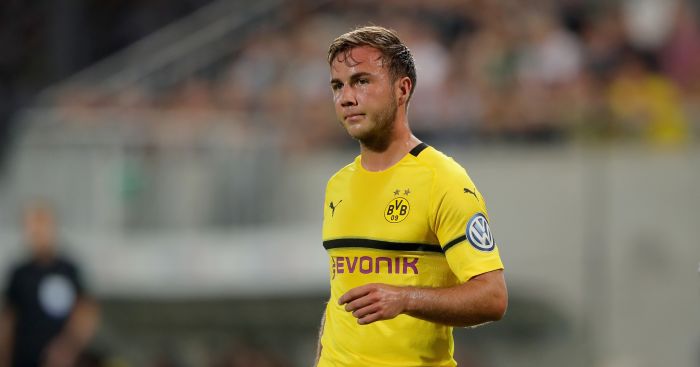 Liverpool manager Jurgen Klopp has refused to be drawn on speculation Mario Gotze could move to Anfield when the transfer window reopens in January.

The Reds are in the market for a new playmaker, having still not officially brought in a replacement for Philippe Coutinho following the Brazilian’s £142m switch to Barcelona in January.

A summer deal for Nabil Fekir fell through following a row over the transfer fee following an issue with a knee injury – while Gotze has once been suggested as a possible target for the Reds.

Gotze, who was considered to be the next big star in German football after scoring the winning goal in the 2014 World Cup final, has struggled since rejoining Dortmund from Bayern Munich in 2016.

The 26-year-old has made just two first-team appearances for the club this season and was left out of the squad to face Hoffenheim on Saturday after a lacklustre display against Club Brugge in the Europa League.

And after being suggested as a possible target for Klopp in January by former Dortmund star Kevin Grosskreutz, Klopp was keen to keep his distance on the potential links.

“I wouldn’t want to talk about this in a press conference in England before a game against Chelsea,” Klopp said in his press briefing before the Carabao Cup third-round clash at Anfield. “If I want to talk to Mario I’ll call him.”

Grosskreutz had said Gotze should look for a move away from the Westfalenstadion in the new year, saying he believes he could rebuild his career under the guidance of his former manager at Liverpool.