Home Liverpool Klopp on Liverpool win: ‘The mentality giants were in town’ 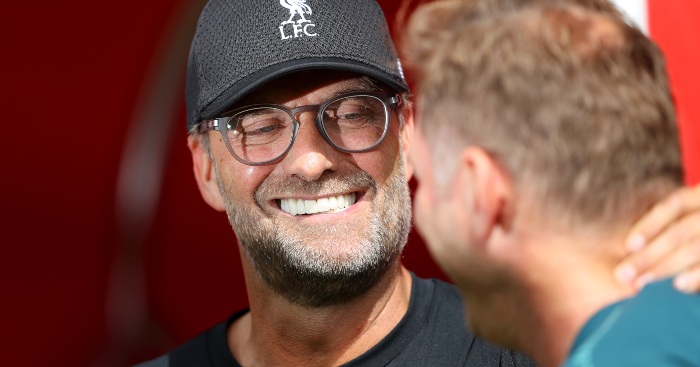 Jurgen Klopp believes winning at Southampton was the best way to celebrate lifting another trophy.

The Reds made light of their midweek exertions, where they travelled to Istanbul and won the Super Cup against Chelsea, to triumph 2-1 on the south coast and record a club-record 11th successive Premier League win.

It was their second prize in the last three months, following the Champions League success in June, and they are now the country’s most trophy-laden club with 46.

But Klopp took much more pride in the way his side battled to three points at St Mary’s thanks to goals from Sadio Mane and Roberto Firmino.

“I have nothing to do with pretty much 99 per cent of the trophies the club have won,” he said.

“It took long enough to get rid of the burden of all the success in the past, so it is good we won the games.

“Actually, it is easy to be happy after the game and then be concentrated the next morning about the next thing.

“It is not that we now run constantly through the floors or whatever and celebrate and don’t put our arms down. It’s all OK.

“That’s why I liked it so much. We are not used to winning big things and then coming to Southampton, I really loved how much respect we showed.

“I said before the game that this looks like the biggest banana skin in history; everybody is waiting for it and probably all the headlines were written already.

“I told the boys the headline I would prefer is, ‘The mentality giants were in town’ – that’s how I feel it in the moment.

“The boys did an outstanding job, all good, let’s go home, recover and start again.”