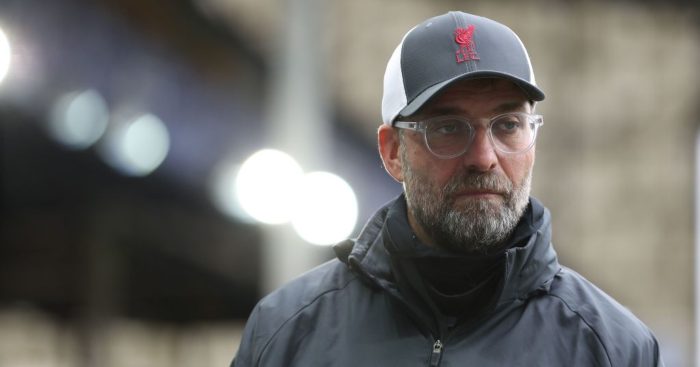 Liverpool boss Jurgen Klopp has been impressed with how his side have coped in the absence of Virgil van Dijk.

The Reds recorded hard-fought victories against Ajax and Sheffield United last week without their talismanic central defender, who requires knee surgery and faces several months out after being clattered by Everton goalkeeper Jordan Pickford during the Merseyside derby on October 17.

Midfielder Fabinho has been tasked with filling in for the injured Dutchman at the back alongside Joe Gomez and has received praise for adapting to the circumstances quickly.

Klopp, who confirmed Joel Matip, Naby Keita and Thiago Alcantara will not be fit in time for Tuesday’s Champions League clash against FC Midtjylland, believes Liverpool are doing as well as can be expected without “the best defender in the world.”

“Every team in the world would miss Virgil van Dijk,” said Klopp at his pre-match press conference.

“He is the best in the world. You play a game, he gets injured, and you play three days later so of course that’s difficult to do because all the boys played together with him and we didn’t have long for them to get used to playing without him.

“Fabinho, who normally plays as a six, has had to come in and play with Joe (Gomez). For that we did pretty well and that will get better 100 per cent because unfortunately everything in life takes time and defending takes time.

“They all played with Virgil at some point but not many times did they play together with each other so we do not expect perfection – but not too far away from perfection.

“Everyone needs time to replace a massive person or player, Virgil is the best defender in the world and so far we’ve done pretty well.”

Tuesday’s clash at Anfield will be the first time Liverpool and Midtjylland have ever met in a competitive fixture.

The game sees six-time winners of the competition Liverpool host a club who were only founded in 1999 and are making their first appearance in the Champions League.

It has been billed as David against Goliath by some of the media in Denmark, but Klopp does not see it that way.

“There are no small teams in the Champions League, there are only teams who show how big they are on the pitch, not in the press conferences before games.

“The 4-0 against Atalanta was not a 4-0 – it was because the score was 4-0 but Midtjylland were in the game. Tomorrow it will be a real challenge and we have to be ready for it, and we will try to be.”

Last season, Liverpool, as defending champions, were knocked out of the Champions League in the round of 16 by Atletico Madrid and forced to watch the finale of the competition from their summer training camp.

Klopp is keen to avoid another early exit this time around and is ready to resume the club’s love affair with the competition.

“It should not happen again, of course, but that is far away. We played a really good game against Atletico, but people tend to forget that when you lose,” said Klopp.

“We love the competition even though we got knocked out early. It is Liverpool in the Champions League at Anfield again tomorrow, even though there is no crowd, and it is a competition we love. I hope we showed that last week too.