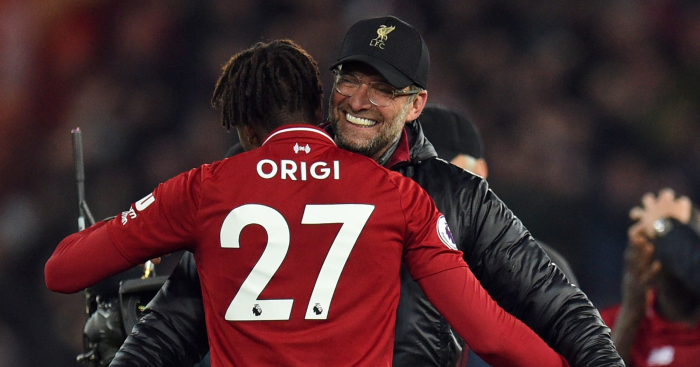 Jurgen Klopp paid tribute to forgotten Liverpool striker Divock Origi after he scored a dramatic winner in the Merseyside derby.

Origi netted his first goal for the Reds since May 2017, bringing to an end a difficult spell with injuries and poor loans.

The Belgian suffered an ankle injury in his last appearance in this fixture, the victim of a horror tackle from Ramiro Funes Mori in April 2016.

And Klopp made note of that striker’s struggles to regain his form and momentum since.

“I said it to him when I sent him on the pitch, actually. I had it in my mind. I’ve never forgot it since,” he said.

“Fouls and harsh tackles happen, but in his case it was so obvious that it was a break in his development.

“At that time he was outstanding. After that, it took a long time before he felt absolutely nothing.

“It all changed a little bit (for him), you lose confidence and you don’t play from here (touching his stomach) any more.

“So it was always in my mind when I thought about Div, that night (against Everton). And now he can finish that book and from now on everything will be fine again.”