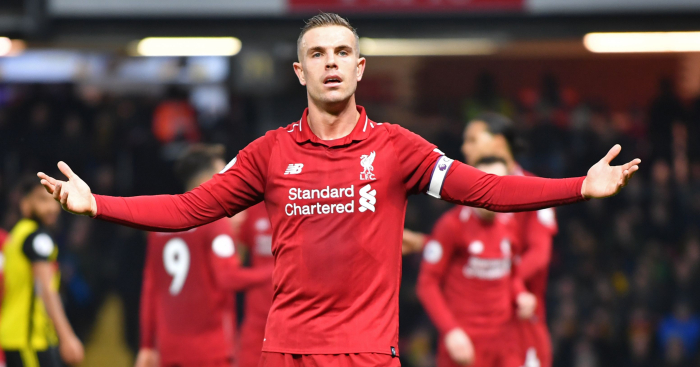 Liverpool beat Watford 3-0 to confirm their best-ever start to a Premier League season after 13 games, with the German named our early winner.

It was a professional performance from Liverpool, who scored three second-half goals in a more measured display.

The one moment of madness came from Henderson however, who was sent off late on for a second yellow card.

Klopp regrets that the Reds will lose their captain for next Sunday’s Merseyside derby.

“We cannot change it anymore and he is a fantastic boy, an outstanding, good person with a big heart and sometimes you don’t do the right things in the right moments,” he told Sky Sports.

“He obviously didn’t have as much oxygen anymore and it was only a little touch, but I would have given the second yellow as well.

“I think they were both yellow cards but things like this happen if you play in a defensive-midfield situation.

“I don’t know how many challenges Hendo had today or situations where he had to be closing up either the player or the space. Twice he was there with a hand and made a tactical foul.

“The second one I didn’t like too much because we wanted to change him in that situation, Fabinho was ready and then he got it. Things like this happen, it is nothing serious and we won the game.

“The only not-so-nice thing is that he cannot play against Everton but that’s already accepted.”