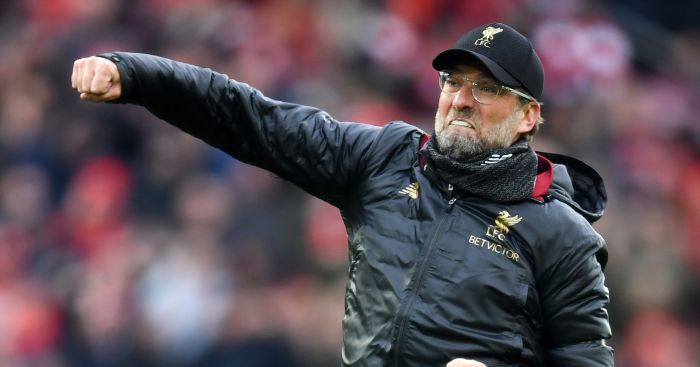 Jurgen Klopp thinks Alisson “saved” Liverpool in their 2-0 victory over Chelsea on Sunday that saw them leapfrog Manchester City back to the top of the Premier League.

Sadio Mane’s header from a Jordan Henderson cross was followed moments later by a world-class strike from Mohamed Salah, his 22nd of the season, as he cut in from the right to unleash a left-footed shot into the top corner.

Chelsea head coach Maurizio Sarri was forced into a change, introducing Gonzalo Higuain and moving Eden Hazard from a false nine role into his usual position on the left, which brought immediate results.

Hazard beat Alisson in a one-on-one only for his shot to rebound off the post before firing a first-time, close-range shot straight at the goalkeeper when he seemed certain to score, with Higuain also missing a chance soon after.

And Klopp picked out Alisson for praise during that spell that could have swung the match Chelsea’s way.

“There were 10 minutes when Chelsea changed their system and had their chances and Ali saved our life,” said Klopp.

“Apart from that we controlled and dominated the game for 80 minutes which is the best you can say about a game against Chelsea.

“But in these 10 minutes they could have changed the game completely, a post and two saves from Ali, right? But then we controlled the game again. It was a fantastic performance and an even better atmosphere and a very important result.

“We showed a lot of really good things in the first half. But a little problem for us was the wind. In the second half it was a big plus. Chelsea struggled with the build up.

“It was in our favour second half and we used it, and we needed to be a bit more flexible on the right flank.

“First half we were left side dominated. That was one of the things we spoke about at half-time.

“It was wonderful that we got a goal from there, with Hendo (Jordan Henderson) chipping the ball in.”