Home All The News Klopp: ‘Positives’ to take from narrow Man Utd defeat 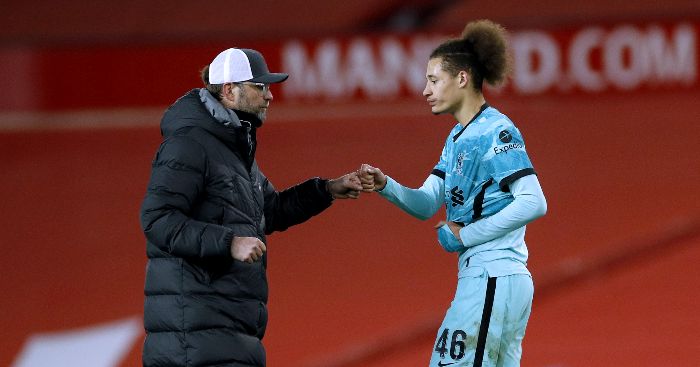 Jurgen Klopp insisted that were positives to take from their tightly contested FA Cup defeat to Manchester United at Old Trafford.

Liverpool took an early lead thanks to a majestic chip from Mo Salah over Dean Henderson. But Man United soon hit back on the counter-attack.

The move was led by Marcus Rashford who unleashed a pinpoint cross-field pass to Mason Greenwood. The young forward took it on his chest before he finished it well past Alisson.

The hosts completed their fight back as they took the lead shortly after the restart. Rhys Williams failed to clear which allowed Rashford to advance on goal. The forward made no mistake as he calmly slotted it into the bottom corner to make it 2-1.

United’s lead only last ten minutes, though. Roberto Firmino let in Salah who was able to finish from close range for his second goal of the game.

Liverpool grew in confidence from this point and looked most likely to score the winner. But in the 78th minute, Edinson Cavani won a free-kick on the edge of the area as he was brought down by Fabinho.

Bruno Fernandes stepped up to take it and he smashed the ball into the far bottom corner past Alisson in goal to send United through to the fifth round.

Speaking post-match with BBC Sport, Klopp admitted that his side struggled with Man United’s “intense” counter-attacks:

“There was a lot of good things and some mistakes around the goals. If you want to win here you have to be absolutely top and we were not.

“For the first goal we had no protection, we wanted it too much. Things like this should not happen but they can happen. We had too many platers in a receiving position.

“We can take things out of this game, we try to learn from every game. It’s good for Mo Salah, good for the confidence. It was a tough game. We want it hard but tonight it was not enough.

“If you win a game there are negatives, if you lose a game too but I saw the boys really, really wanted it. We had problems on the counter-attack, it was intense, but there were positives.”