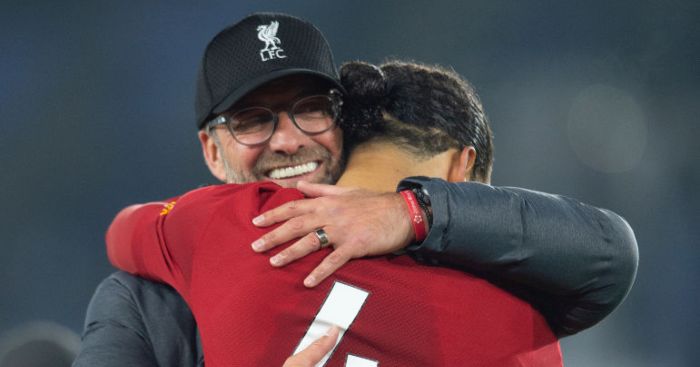 Jurgen Klopp provided an update on a raft of Liverpool injury concerns ahead of the visit of West Ham on Saturday.

Virgil van Dijk’s potentially season-ending injury in the Merseyside derby was followed by Fabinho limping off in their Champions League clash.

The situation leaves Klopp with a defensive headache, with Rhys Williams – who came off the bench to replace Fabinho on Tuesday – expected to make his first Premier League start this weekend.

And Klopp says Williams’ progress has been “exceptional”, hailing the work of Liverpool’s elite development coach Vitor Matos for the work he does with the him, as well as with Billy Koumetio and Nat Phillips, two other young centre-back options.

Klopp said: “I can say a lot about his progress last few weeks, pretty exceptional. One of the benefits of having Vitor Matos with us. We have Billy the kid and Nat Phillips too. These are our boys. All training. We have to make a decision.”

Klopp then gave an update on the Van Dijk and Fabinho injuries, before insisting Jordan Henderson – who could also fill in in defence – does not have a fitness problem.

Klopp added: “It’s clear to say he [Van Dijk] is a quicker healer. He can cope, it’s clear. All these things will help. “Enjoying [this period]? Not the right word but it is a challenge. If you overcome the 1st incident then it is about solutions. Problems are there to find solutions.

“[Virgil] is a friend, he is our boy but we are used to injuries. It was just how it was unnecessary. More you like a person, more you suffer with them. 3 weeks ago, nothing we talk about now. Asked about it but we don’t think about it.

“Injuries are the worst part of a pro’s life. A part of the game. We are unfortunately used to it. 2 things, we care about Virg and will take care of him but our focus is on available players. That is what we do.

“Fabinho is not in, a little injury, out for the weekend and slightly longer but all the others are in contention.

“Henderson doesn’t have a fitness problem. Responsible is the best word for it. I can count the games he’d played and we have to try to get through the period. October has been like a December, that means it’s intense, hectic. We have to makes these decisions.”

Thiago Alcantara and Naby Keita are also set to miss the visit of West Ham on Saturday, but Klopp says their recovery is going smoothly.

He said: “Both in a good way with rehab. You saw the Thiago incident, needs time to settle. Not exactly sure as nothing is broken. Desperate to make next steps. Same for Naby, just different injury.

“When the boys train, an ideal world they get enough to prepare for 10 or 20 games, so when someone is in training it doesn’t mean you can use them immediately. I am not in a rush with the boys, the medical dept tell me and that’s the info I work with. We make the best.”