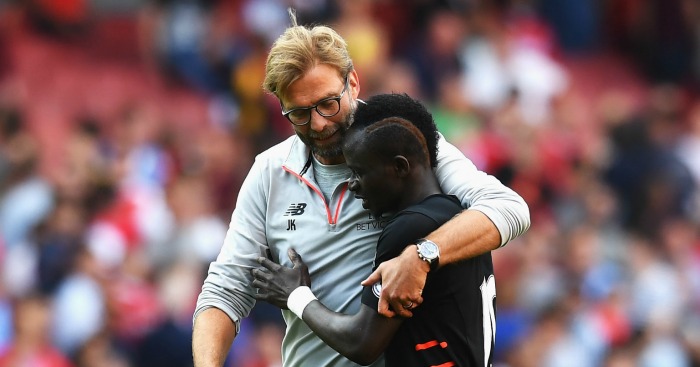 Jurgen Klopp has confirmed that Sadio Mane will feature against Leicester, but three others have been ruled out.

It was reported earlier this week that Mane had returned from international duty with Senegal having suffered an injury.

However, the Liverpool manager has confirmed that the forward will be fit to face the champions on Saturday.

“Mane has trained completely normal,” Klopp said at a press conference on Thursday.

There is bad news on the injury front at Anfield however, with Emre Can ruled out.

“Emre is different,” Klopp added: “He has a little issue with his ankle.

“Maybe he’ll be back in training today or tomorrow, but he won’t be ready for Leicester.”

Ragnar Klavan will not feature in Saturday’s late kick-off, with his manager saying: “We will know more about that this afternoon.”

On Mamadou Sakho, who failed to secure a move to another club on deadline day, Klopp said: “Now it’s about making Mama fit, which he isn’t after his time out. Then we will see what happens.”

The German added, on the situation with the defender: “It’s not a problem. You don’t have to gain my trust. It’s a situation we have spoken about before.

“He didn’t play football for a long time, he needs to play football. That’s difficult here because the other players are fit.

“We had to speak about it before the window closes – that’s what I did.”