Home All The News Klopp reacts to Man Utd draw: ‘We always play against the wall’ 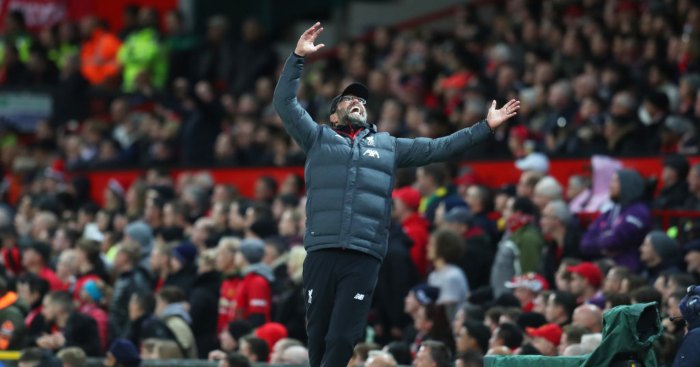 Jurgen Klopp says Liverpool always have to “play against the wall” after their 1-1 draw against Manchester United.

Ole Gunnar Solskjaer’s side headed into this match as underdogs against Klopp’s rampant outfit – little wonder given the visitors had won their last 17 league matches and the Red Devils were just a point off the relegation zone.

“We were good enough for a point,” Klopp told BBC Sport.

“We gave Man Utd an opportunity to play the way they wanted to play with five at the back etc. They were hardworking. Our orientation wasn’t good enough. We felt under pressure when we weren’t and could have turned inside at some opportunities.

“The first goal I think everyone can agree it was a foul but with VAR it is not a clear foul. That is the situation. We didn’t lose but it was an obvious foul. There was clear contact and Divock Origi goes down. They carried on and counter-attacked. Yes, there is contact, I’m sure they said that but it is not a ‘clear foul?’ That doesn’t work. That’s just not how it should be.

“Then we got a disallowed goal. I didn’t see it back but it was probably handball but everything just seemed to go against us. We changed a little bit our formation and had these moments. Then we scored the goal and was in charge of the game.

“The stadium was silent and people probably thought Liverpool would score but we take the point and move on.

“We always play against the wall. We need to do better but it is how it is. I don’t think Man Utd can play like this if the other team doesn’t have the ball as much. We play very often against a team like this. Maybe we can do better. One point is completely fine. We carry on.”