Jurgen Klopp has suggested that Christian Benteke should find another club this summer. 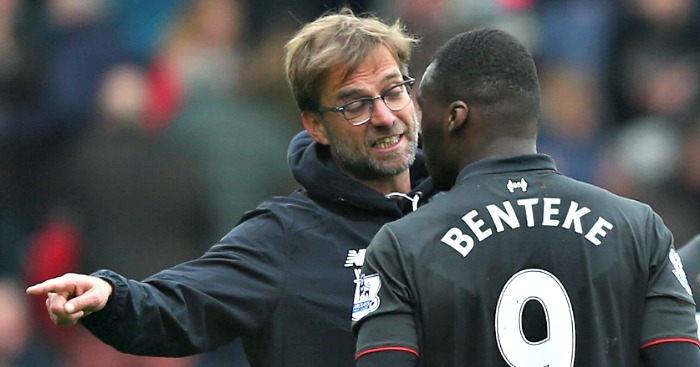 Jurgen Klopp has suggested that Christian Benteke should find another club this summer or find his game time at Liverpool restricted.

Benteke joined the Reds from Aston Villa in a £32.5m deal this time last year, but the Belgian struggled in his debut season.

He started the season as first-choice striker at Anfield, but soon found himself behind Daniel Sturridge, Divock Origi and Roberto Firmino in the pecking order after Klopp replaced Brendan Rodgers as manager.

Earlier this week, it was claimed that Everton would rival the London club to sign Benteke, who would command a fee upwards of £30m.

When asked on the Belgian’s future on Friday, Klopp suggested that the 25-year-old would benefit from leaving Anfield.

“Christian has already said maybe it makes sense to go to another club,” he said. “Everyone knows about it.

“Christian is still a great striker. We have a few more strikers and I think it makes more sense to give them match time.

“But if there are clubs that want a real striker than they have to make real offers – otherwise we will find solutions.

“A few clubs try to gamble – we are not part of this, we are serious.

“It’s all about the team. It’s quite difficult. A few players only have 10 days training.”