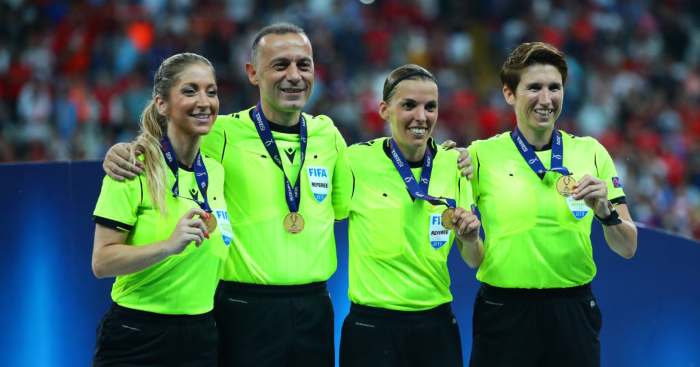 Jurgen Klopp says he “couldn’t have more respect” for the officials after Liverpool beat Chelsea on penalties to win the UEFA Super Cup on Wednesday night.

Olivier Giroud put Chelsea ahead in the first half, only for Sadio Mane to level as the match went to extra-time. Mane would score again before Adrian brought Tammy Abraham down in the box, allowing Jorginho to make it 2-2.

Like 14 years ago, it took penalties to split the sides as Adrian wrote his name into folklore at a club he only joined at the start of last week.

The former West Ham goalkeeper was handed his first Liverpool start in the Super Cup due to Alisson Becker’s calf injury and the Spaniard denied Abraham to secure a 5-4 spot-kick success.

Stephanie Frappart became the first female official to take charge of a major UEFA men’s competition event as Klopp’s men backed up their Champions League success with victory in Istanbul.

And Klopp, speaking to Liverpool’s official website, was full of praise for the officials, he said: “I told the ref team after the game that if we would have played like they whistled, we would have won 6-0. That was my absolute opinion.

“They played a brilliant game. I told her as well that I am not happy with the penalty decision because I’m still not sure that it was a penalty, but it’s not important anymore. They were really good.

“Whatever you could have thought before the game, there was pressure on them like hell with an historic moment.

“Staying by yourself, staying calm and do what you have to do, decide very important things in a very difficult and intense game, I couldn’t have more respect, to be honest. It was really a brilliant performance.”